More Than My Boob 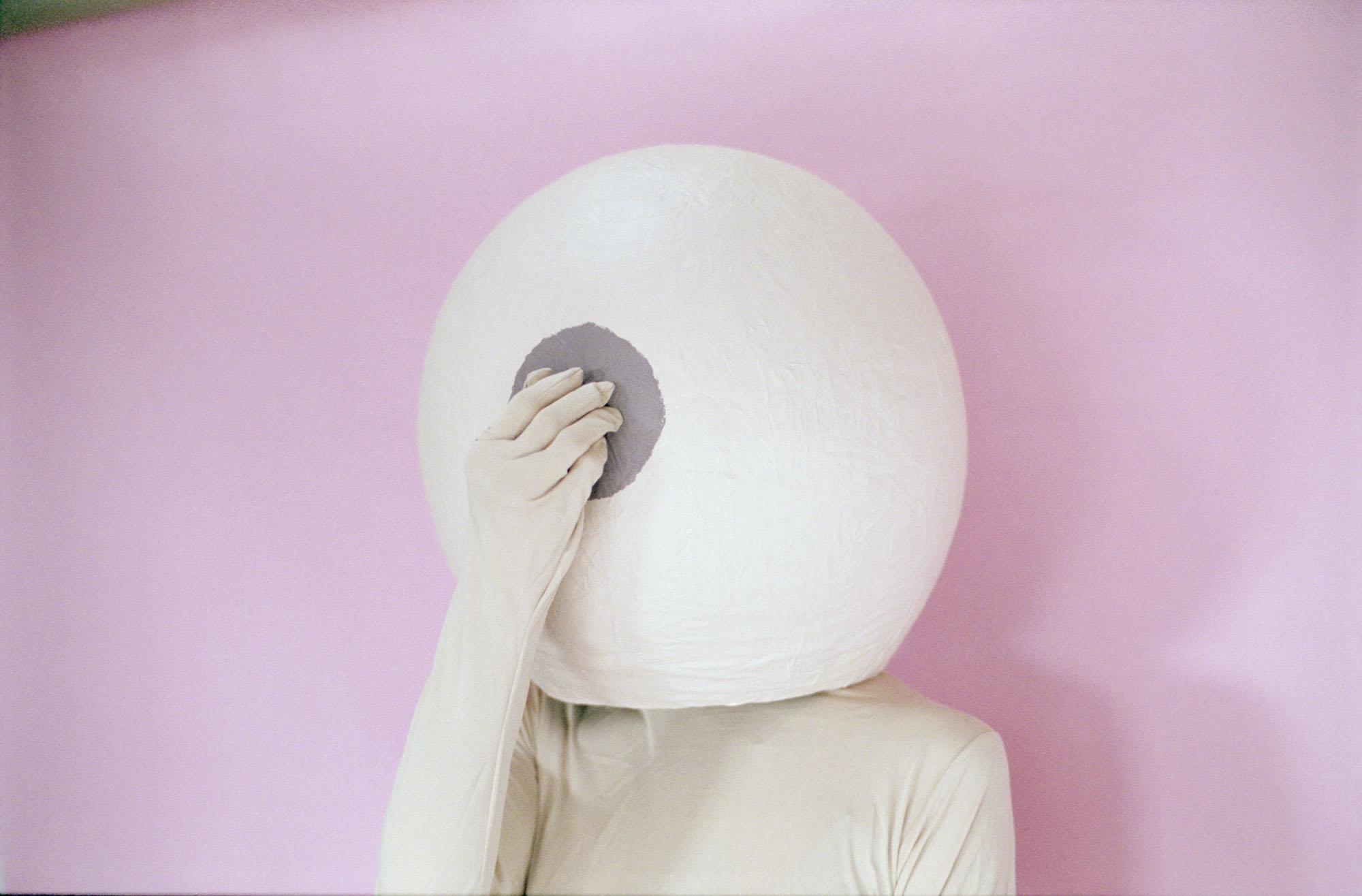 Buckets of glitter, fake rubber breasts, pink bodysuits, and withering roses are just a few things one may encounter at Annique Delphine’s studio. Annique began working as a photographer after years of modelling and acting in Paris, Milan, and Los Angeles. Even as a model, she was always more interested in what the photographers were doing.

She explains: “From the first job I ever booked as a model at 14, I bought a camera and I’ve always been shooting flowers and been building little sets with my Barbie furniture. I never thought about the fact that it could be a profession for me. At 24, finally, I realised that.” After a career in modelling made her feel depressed and self-destructive, she decided to study photography at Neue Schule für Fotografie in Berlin.

Annique’s work is visually decadent, playful, and gluttonous. From photographs of rubber breasts smothered in ice cream and chocolate sauce, to videos of flowers dripping with thick paint, her work repurposes traditional symbols of femininity in playful and curious ways. Surrounded by all this visual decadence, we talk about her recent exhibition, Reclaim the Feminine, and her work as a feminist artist. 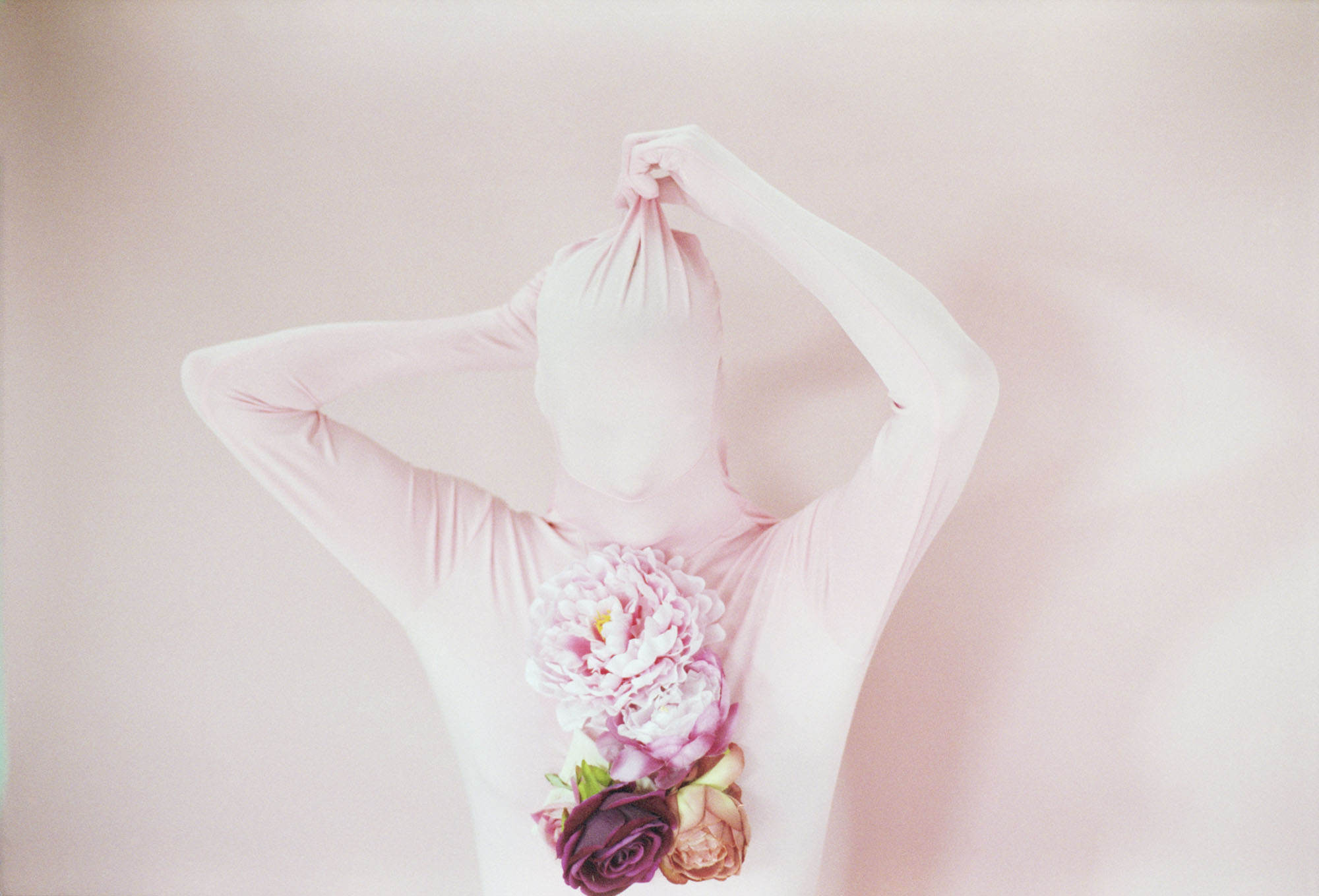 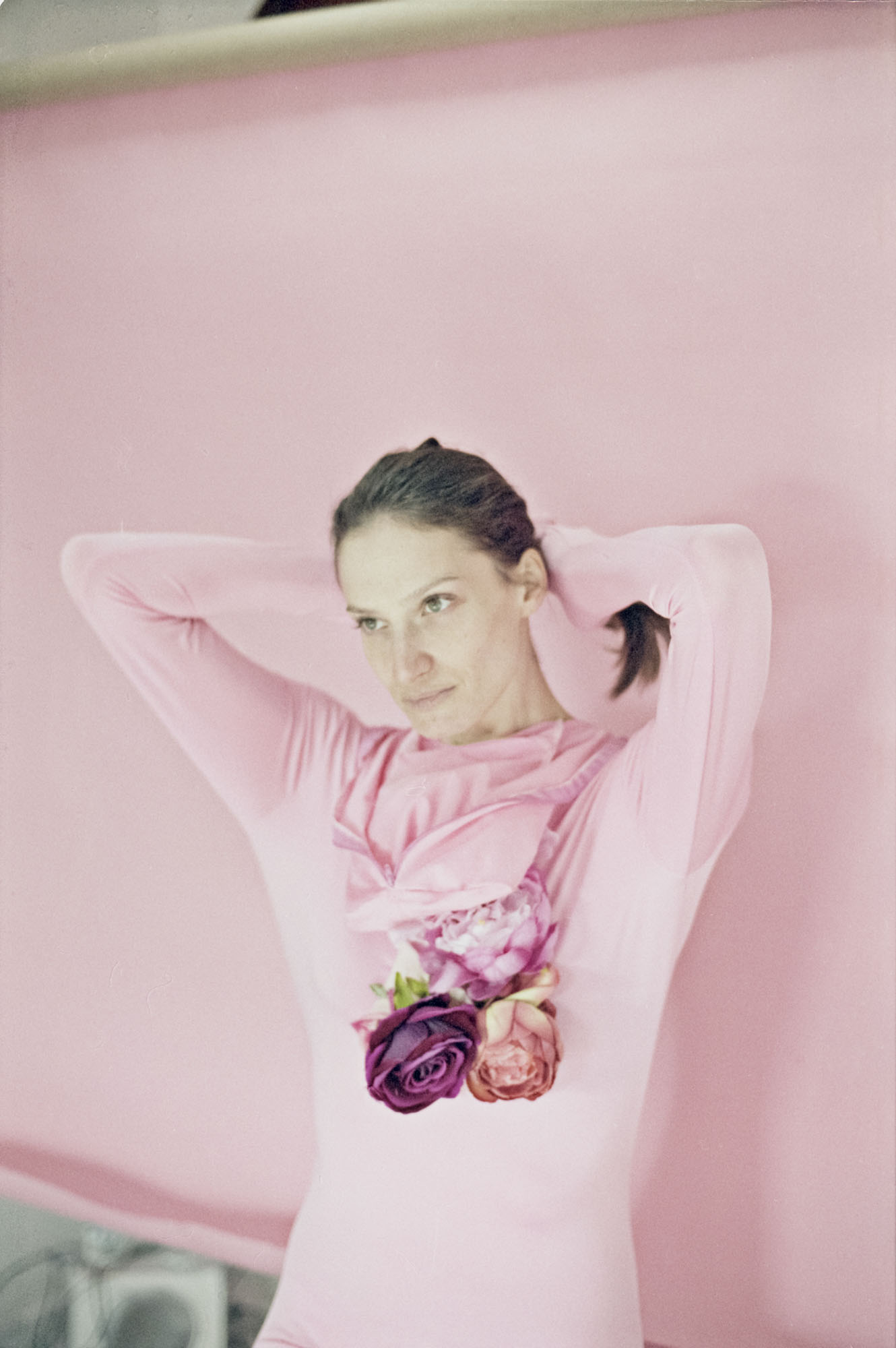 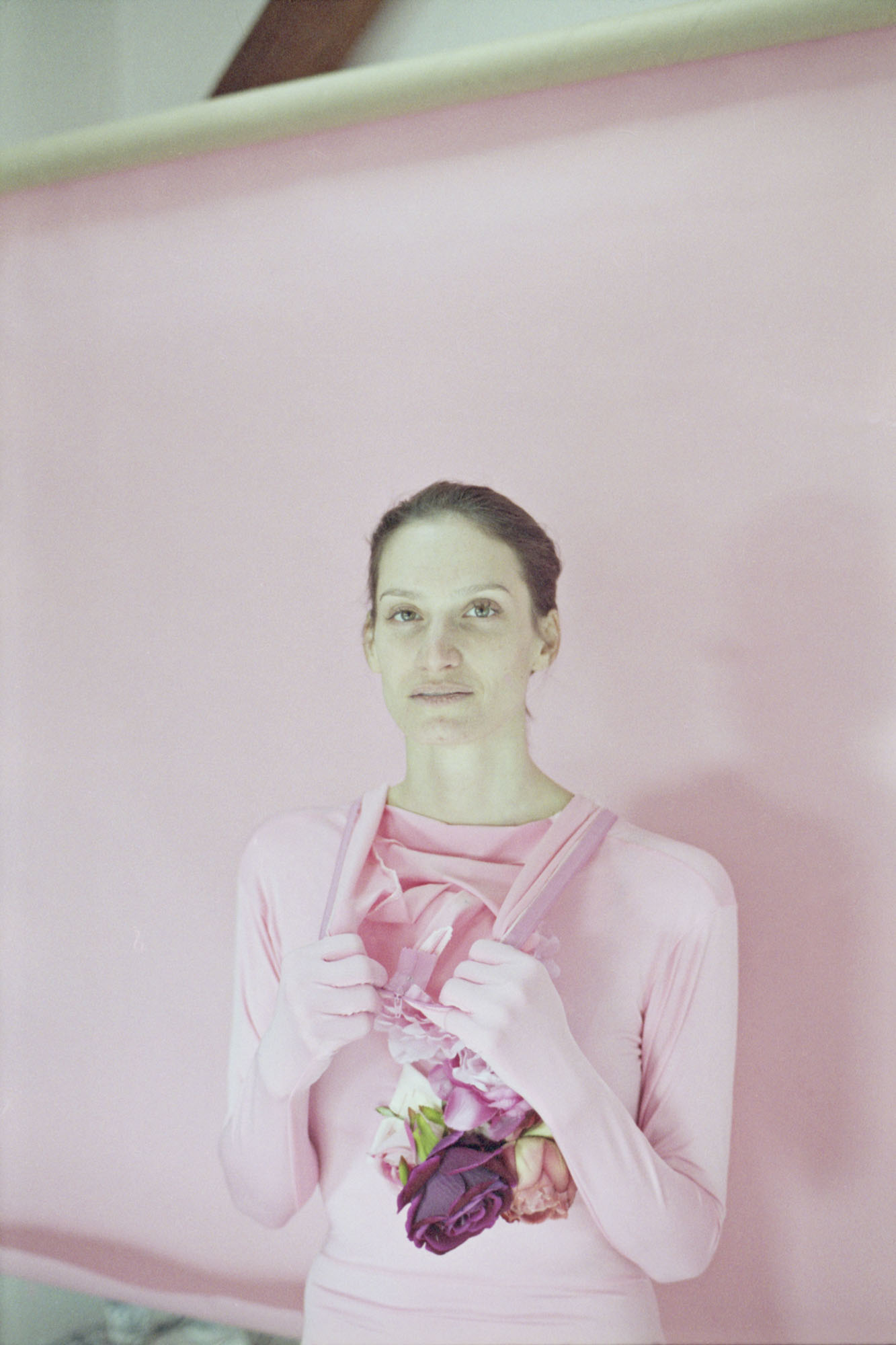 In what way is your work reclaiming the feminine? For me, the main work right now is to start a dialogue. What is feminine? What is masculine? I think they’re just social constructs. And these traits that we assign them – why is strength a masculine trait, why is softness a feminine trait? Why are women supposed to be weak? Why is “being a girl” used as an insult? And if we’re still holding on so strongly to those social constructs, then let’s reclaim traits like power and strength for femininity too. So that’s what my show’s about. Men can actually also be soft, agreeable, gentle – whatever you think is assigned to femininity. I want to rebrand femininity.

How are you disrupting the masculine–feminine binary with your work? I’m questioning the norms, what people find acceptable, and how female artists express themselves. Like this whole cliché: when a male artist paints, photographs or draws a naked female body it’s completely acceptable, but when a woman does it she’s vain, she’s conceited. I want to point that out and change it. And then the whole ‘free the nipple’ thing. My whole point of making the boob head was to play with that and say, “Haha, you can’t censor this,” but actually Instagram sometimes censors even the big papier-mâché boob head.

A Selection of Annique's Work

You have a big presence on Instagram, so how does censorship affect you? If they delete something I just post it again. I guess my following is not big enough yet that I get reported a lot. But every once in a while I get reported. Sometimes I think they’re just going to delete me and then I’ll have to start from scratch again.

Ai Weiwei shared your work on his Instagram feed. How did that feel? That was wild! It happened the day before the opening so I was already so full of adrenaline that I didn’t freak out because I was already freaking out. I’ve seen him on Torstraße quite a lot but it wasn’t on my mind that he might see it. Then when he did I was like, “Oh my God!” He’s definitely an idol of mine because he disrupts and questions social norms. 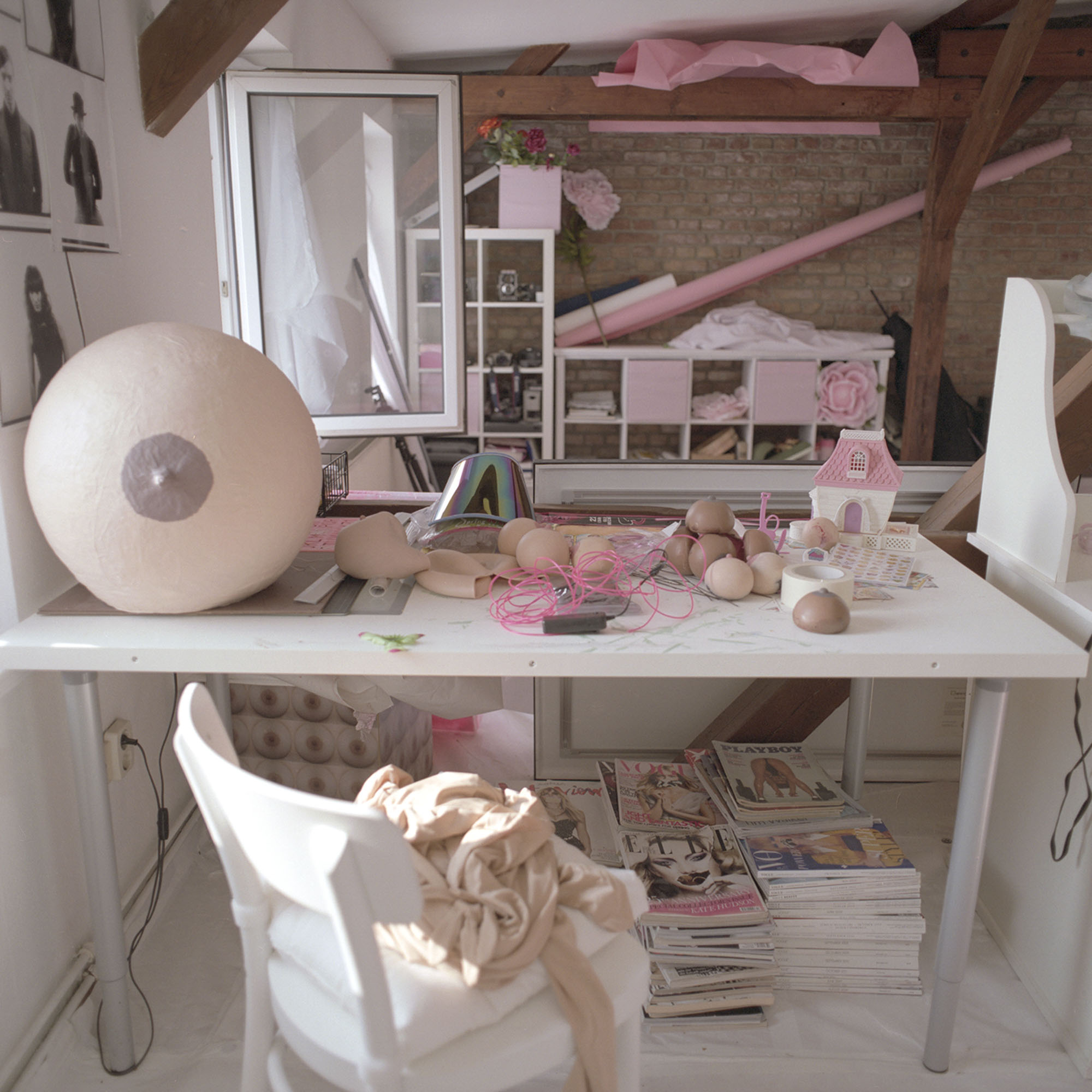 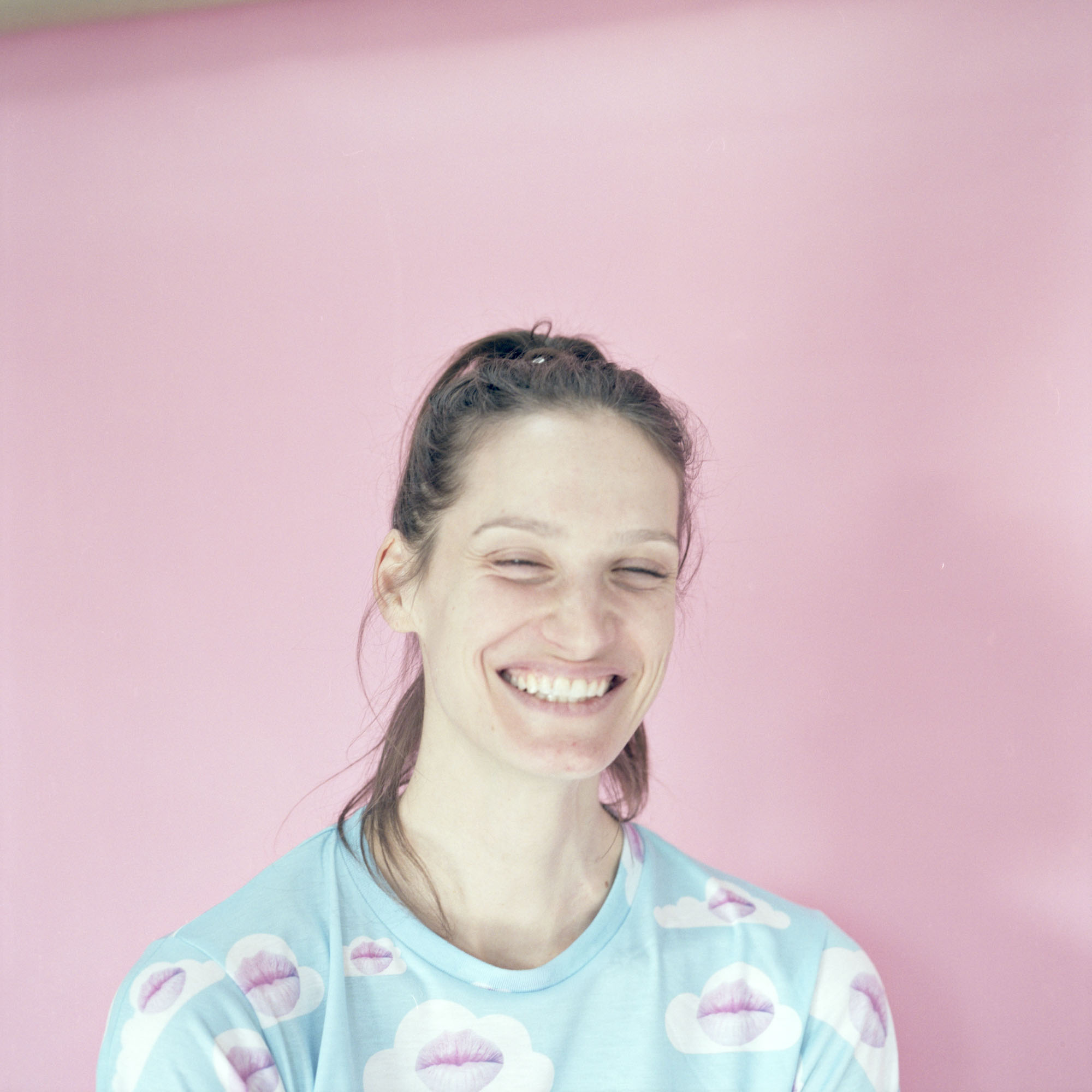 Let’s talk about some of the materials you use. Breasts are a recurring image in your work, what do they represent for you? These little breasts I use, I saw them in a store years ago and they were marketed as a novelty gift. On the packaging it says,“Grab ‘em, squeeze ‘em, rub ‘em” and there’s a hand photoshopped on it that’s grabbing them. I thought that was really creepy and absurd. I bought a bunch of boxes and started working with them.

For me, they symbolise how objectified female bodies are, because they’re literally objects you can buy as toys. In other stores they’re marketed as sex toys, which I don’t understand at all. They’re so perfectly artificially shaped and round, and just flawless; that’s another thing we have to deal with. We have to be perfect, smooth, beautiful, you know, all these things are expected of us just because we’re feminine. Just because we’re women. And then a big boob for me was another symbol for that. I made that when I was struggling with my relationship with my body and I was self-hating. That was a huge way for me to point a finger at myself and say, “don’t define your worth through the way your body looks or feels!”

Breasts are a symbol of womanhood for me. I mean, not every woman has breasts but they are defined by them. And every woman has a story related to pain concerning her breasts. Either they have small ones, or they were big from an early age and they were sexualised because they had big breasts, or they had no breasts, or they’ve had a mastectomy and now they have to redefine what it means to be a woman because society expects them to have breasts. It’s a really painful subject for all women.

What about the other materials, like flowers, glitter, and ice cream? The flowers symbolise women, and then the white paint that I use in my movies and flower photographs symbolises patriarchy. When I use glitter, or cake, or ice cream, or doughnuts, they’re different symbols to show the way we’re objectified. For instance, if I sprinkle glitter it’s like, “I was only paying you a compliment, why are you saying I’m sexist?” People think they’re being flattering by objectifying us. Also, the way women of colour are objectified more than white women; people think it’s flattering and a compliment if they compare their skin to chocolate. But it’s still objectifying them and it’s still turning them into a fetish. It’s fetishising them by saying, “Mmm I like chocolate” or, “Oh I like vanilla.” So when I take these pictures and post them, I’ll quote something from a book and talk about how women of colour are more objectified than white women, for instance, and what that does. 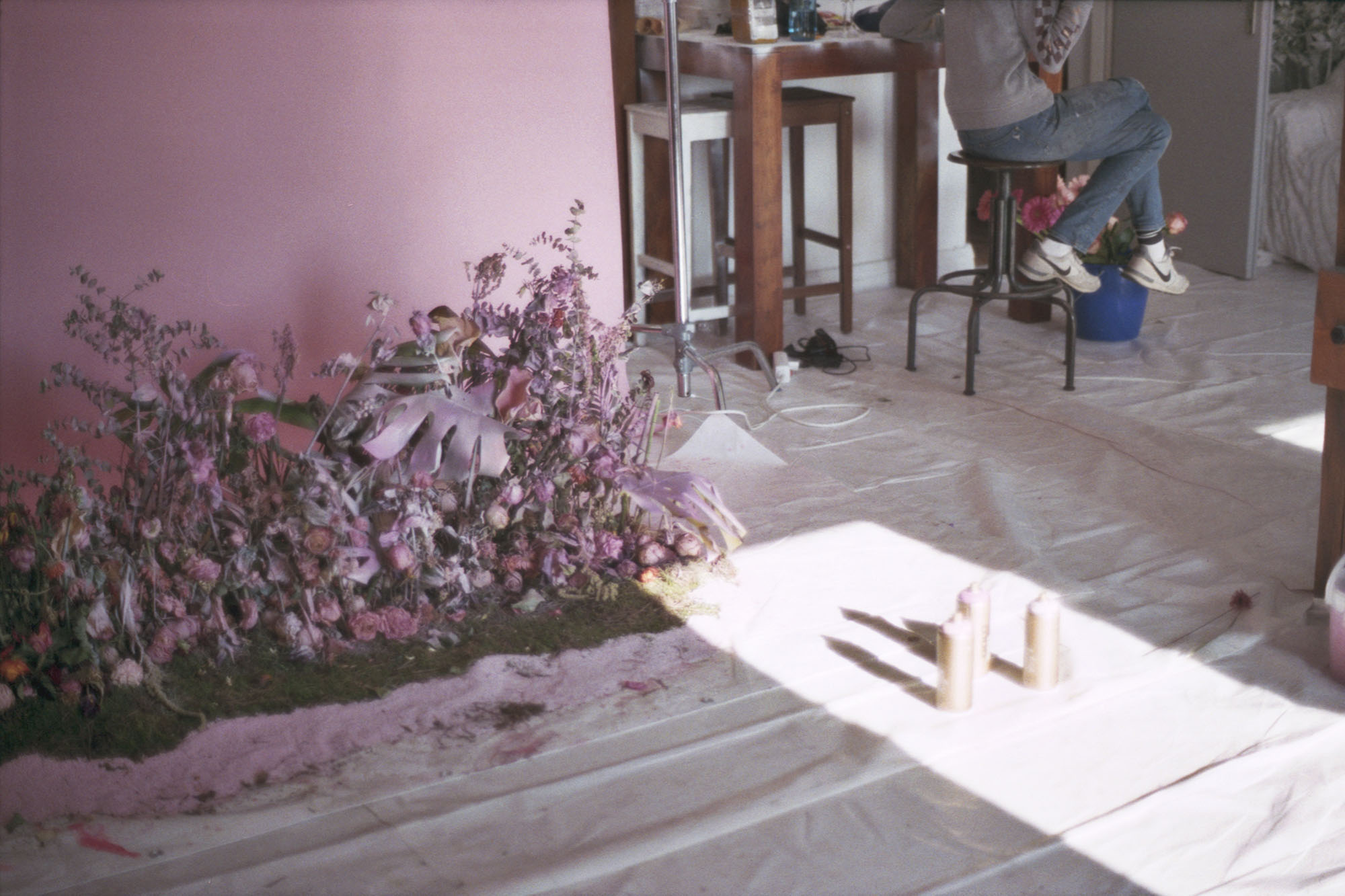 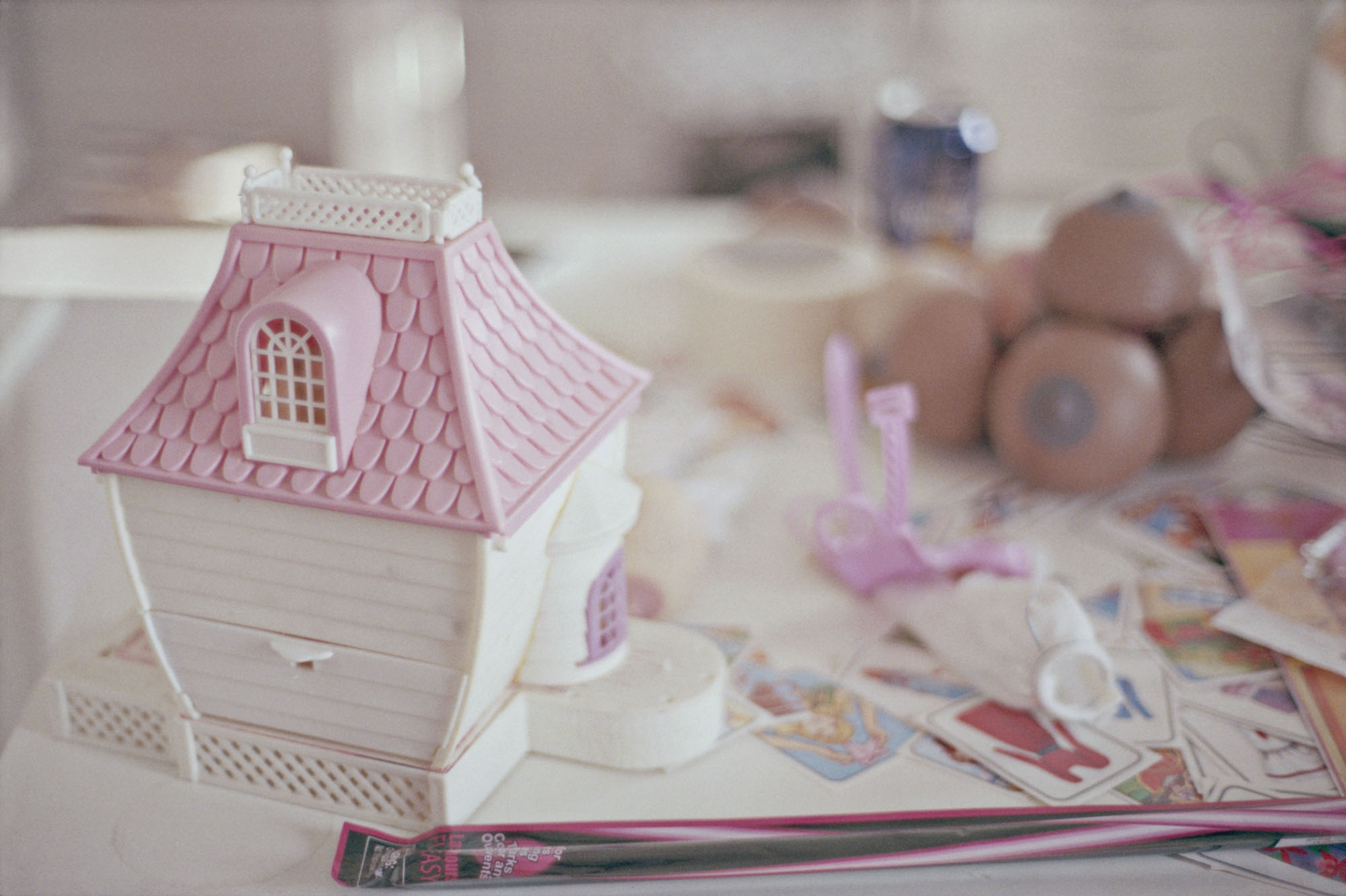 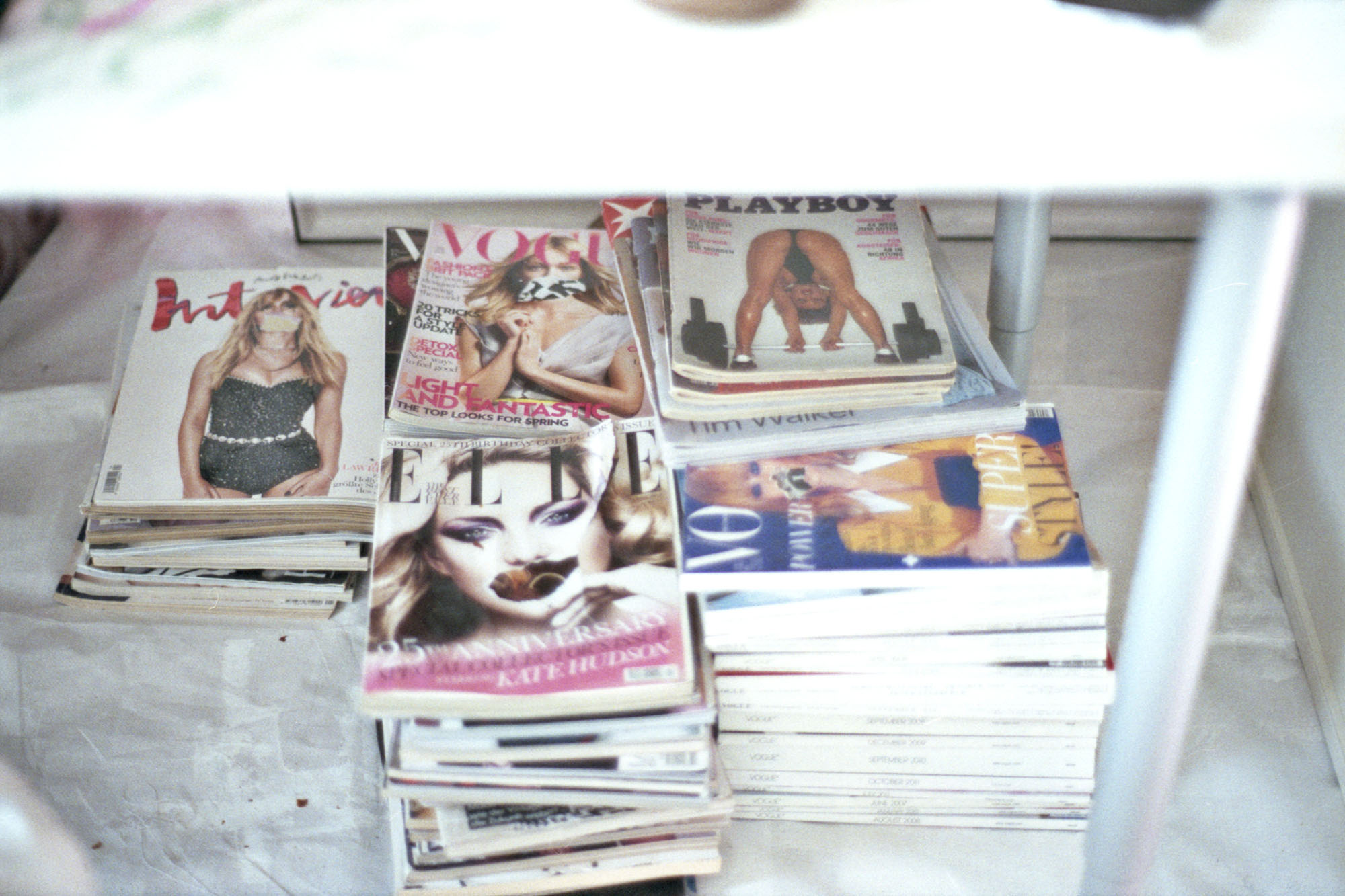 That just got me thinking, I should do this everywhere and raise this army of women that wear their boobs on their heads

How did the boob head workshops come about? Last year in, LA a gallery called Off the Ground Floor was showing some of my self-portraits. They talked with me about the boob head, and the curator said, “You know, you should teach people how to make them in their own skin colours.” So we had a workshop with a small group of women, and everyone made a boob head. That just got me thinking, “I should do this everywhere and raise this army of women that wear their boobs on their heads and say, ‘This is how you make me feel sometimes! I’m more than my boob but you make me feel like this when you objectify me!’’’ 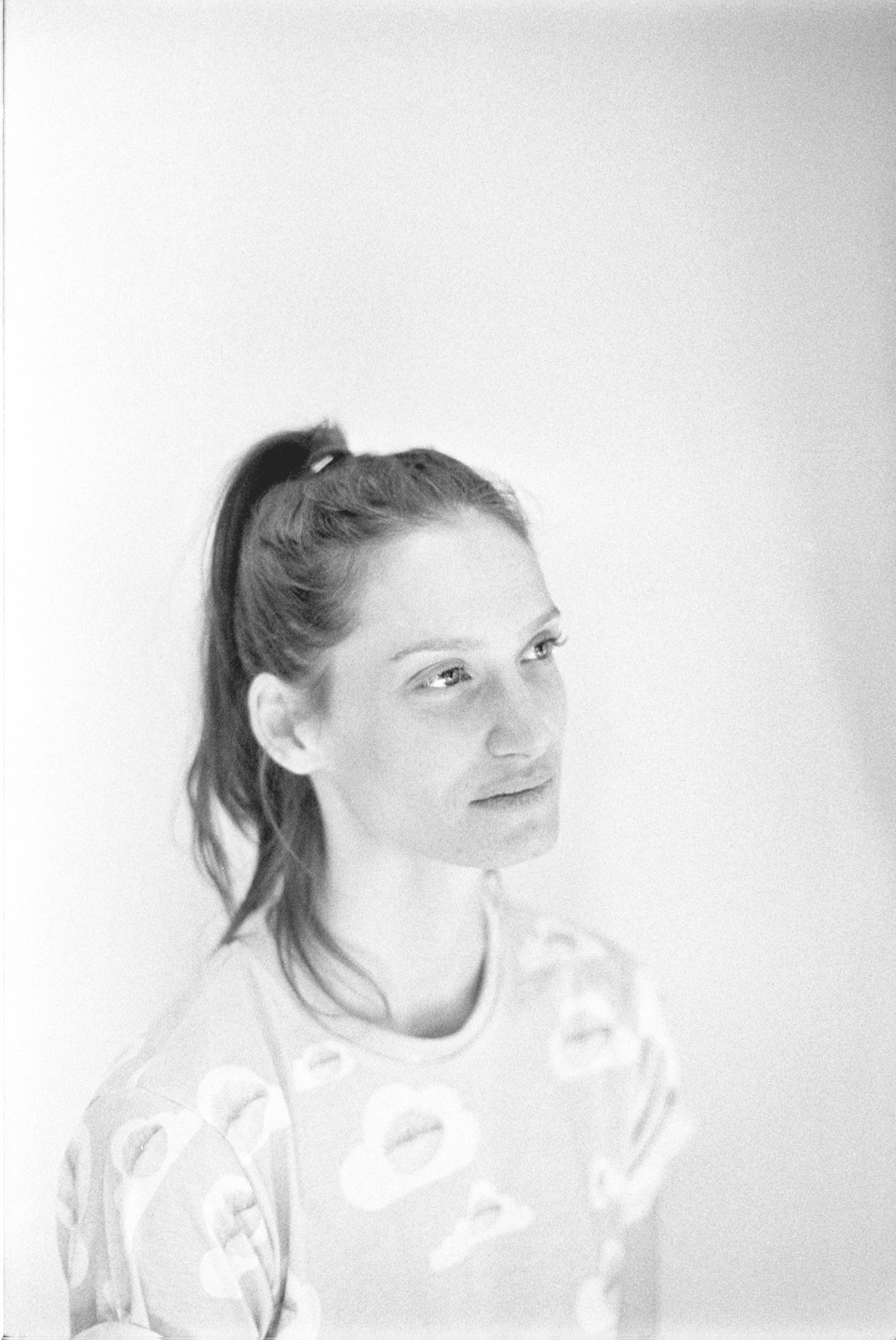 How do you define feminism? I think it’s easily defined as the notion that all people should have equal rights. And since women are a marginalised group, they have to fight for these rights. I think modern feminism is great because it speaks up for all marginalised groups. We speak up for Black Lives Matter, we speak up for indigenous people, we speak up for trans people – it’s not more than that, it’s not less than that. It’s a misunderstood movement because a lot of people think that by lifting up women we’re trying to put down men. I don’t know a single feminist that does that.

Then, historically there have been feminists that were only fighting for white women. Yeah, white feminism is a big problem. I learned a lot about it on Instagram, actually. Just what white feminism is and how black women have always been at the forefront of change, teaching white women how to be better feminists. You think about the first[-wave] feminist movement, about getting women the right to vote. Once white middle-class women had the right to vote they just stopped and all the other women were like, ‘What about us? We’re still here!’ There’s still racism inside feminist movements, and homophobia. We need to change that.

How do you feel about your work in the context of current world events? I don’t know if I can say I’m lucky, but what I do is part of the zeitgeist, it just fits with the narrative. Right now there’s a lot of misogyny, and its intersectionality with racism, classism, and ableism that’s coming up right now. People are becoming more aware of that.

I wasn’t aware of a lot of these issues either until a couple years ago, so any artist that talks about this is good. The more women talk about it, the more people are aware of it.

See more of Annique’s work and keep up to date with her upcoming exhibitions via her website. 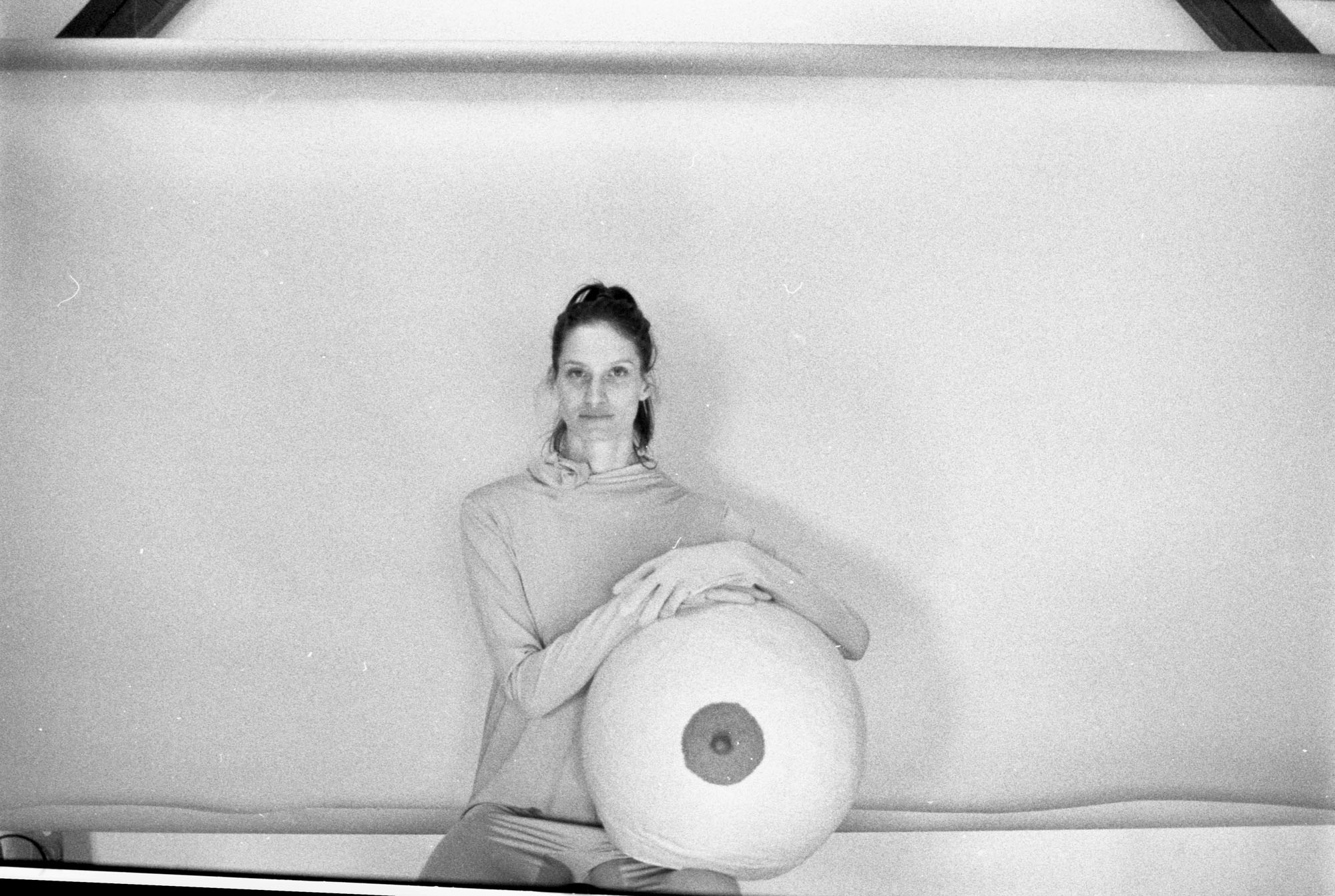