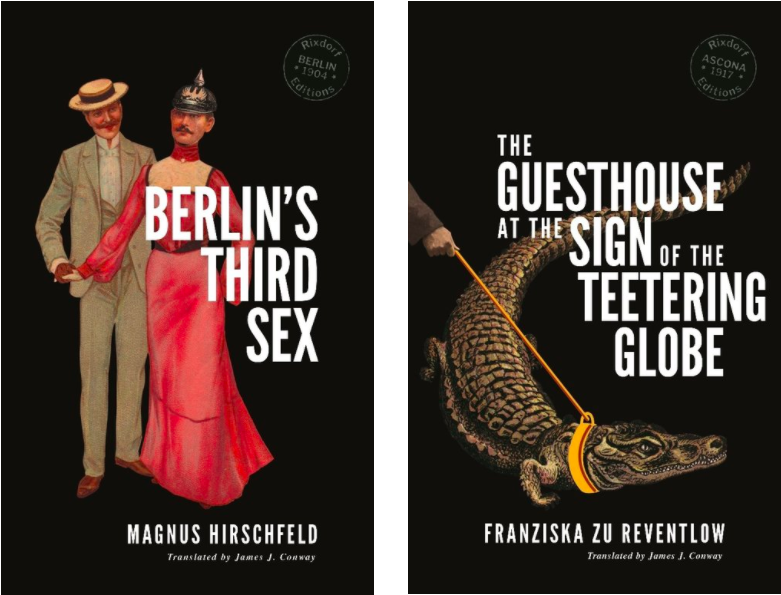 What’s better than going to a book launch at one of the city’s charming English bookshops? Going to two – obviously!

Head down to Curious Fox on the evening of November 9th to see the first two books of new Berlin-based press Rixdorf Editions introduced. Rixdorf Editions aims to bring unfairly neglected texts of the German Empire to a contemporary English-language readership.

The first of the books is The Guesthouse at the Sign of the Teetering Globe by Franziska zu Raventlow. It was originally published during WWI, but with a great sense of humour and smattering of the uncanny, this collection of short stories offers a view of a world in a state of furious change. This is the first time a work by the ‘bohemian countess’, as Franziska zu Raventlow was known, has been published in the English language.

Berlin’s Third Sex, the second of the books to be featured, is also making its English-language debut. Published in 1904, Magnus Hirschfeld’s report from Berlin’s LGBT subculture of the early-20th century is a foundational text about queer identity. We’ve been told it could read like something written last week, as much as it does something written from the Weimar era.

Translator and Rixdorf Editions publisher James J. Conway will be reading from both books and talking about the fascinating and oft-misunderstood era from which they came.