Dispatches: A Frontline Report from Mosul 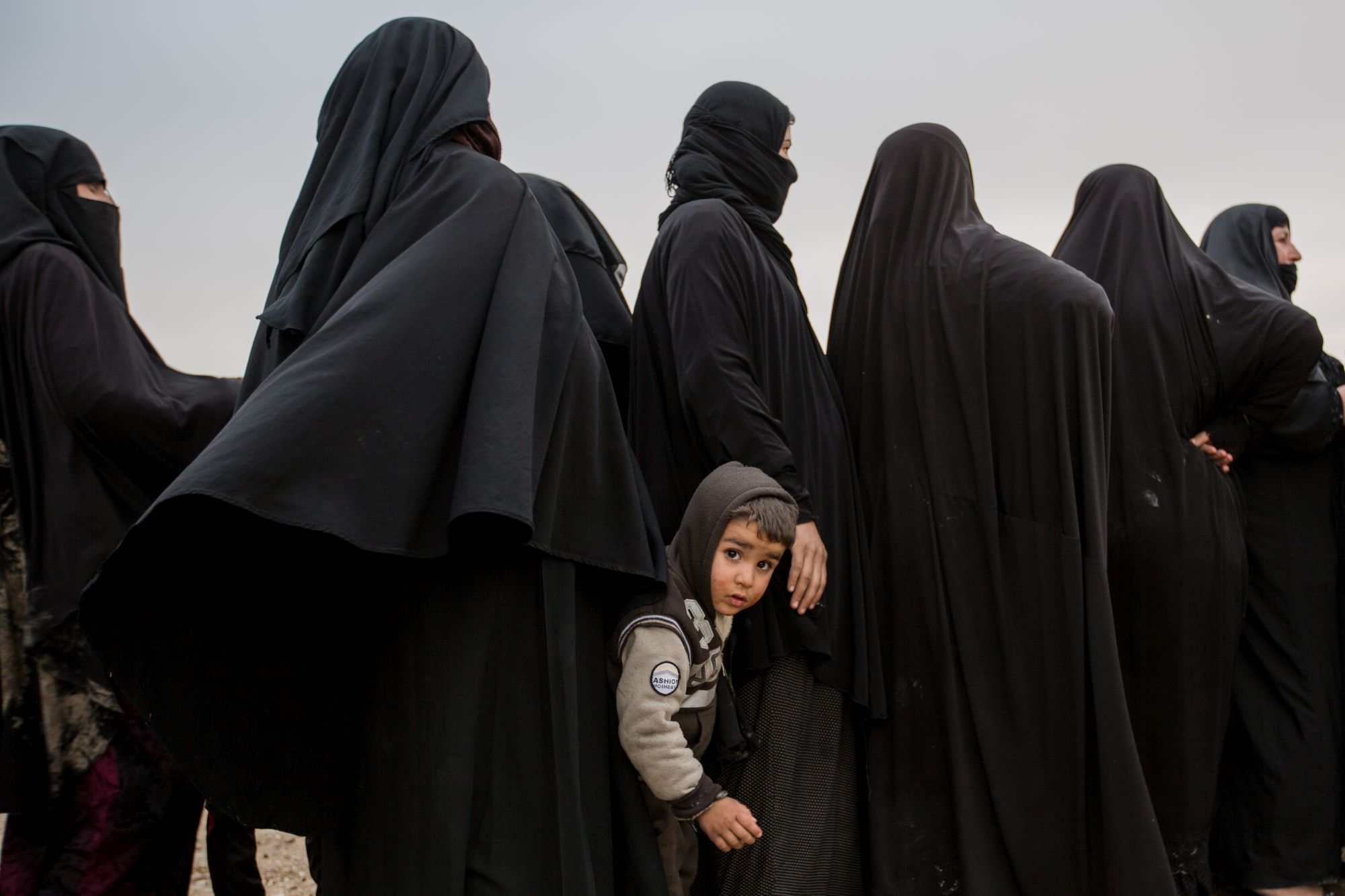 Photojournalist Sebastian Backhaus depicts the ravages of war as only a photographer can. His work focuses on the Middle East, where he continues to report on residential districts shattered by terrorist bombs, volunteer armies preparing for battle, and the horrors of the front lines.

Here, he shares his recent experiences in Mosul, where the largest deployment of Iraqi troops since the 2003 invasion continues its campaign to reclaim the city from ISIS forces. 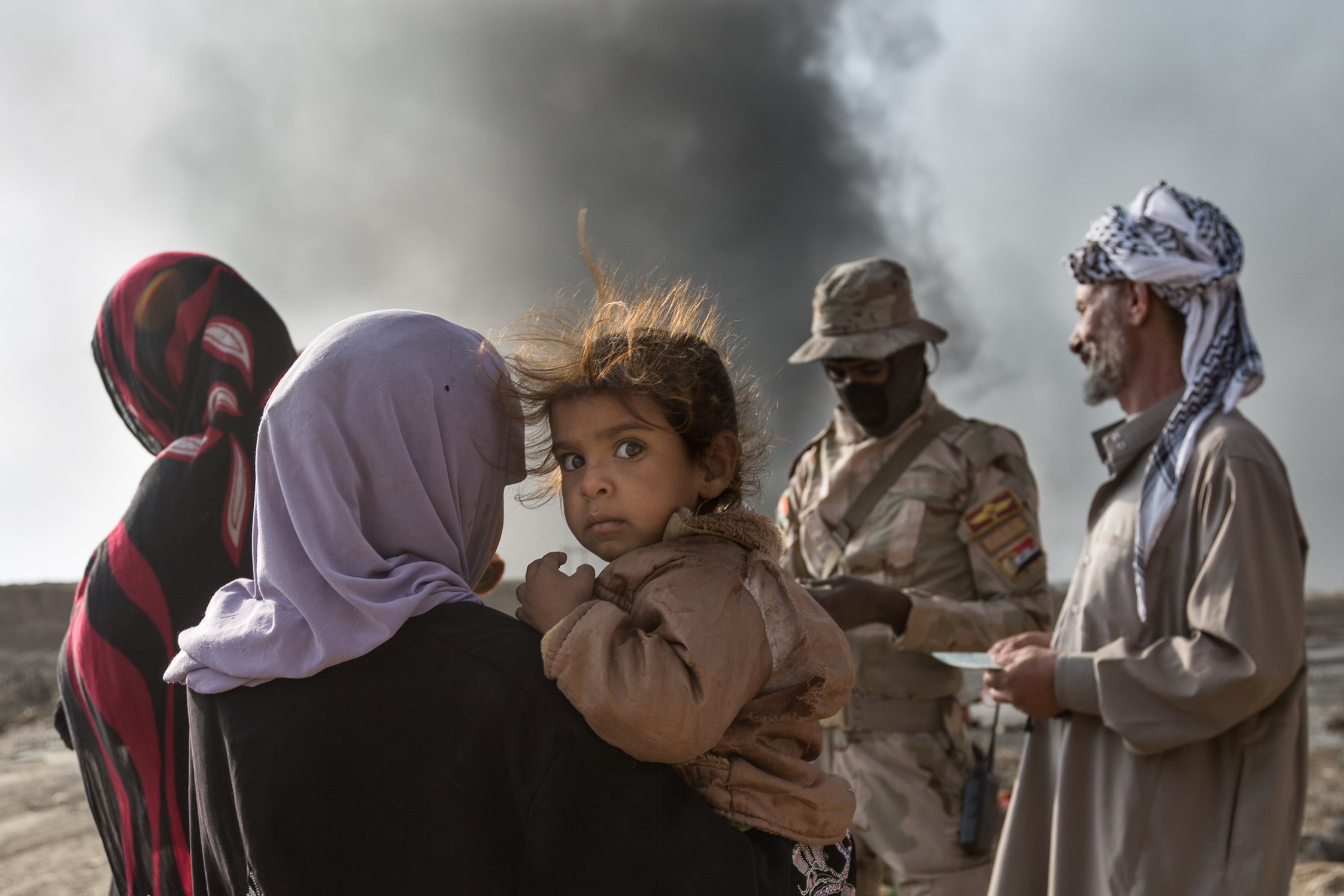 "A family arrives at the first post behind the front line in the desert, after fleeing from their village between Qayyarah and Mosul, where heavy fighting between the Iraqi army and ISIS took place. Here they get checked by fighters of a unit of the Iraqi army. They told me that they managed to flee when ISIS pushed them with other families from their village towards the Iraqi army to use them as a human shield when the army opened fire. "

“Mosul, Iraq has been under fire since October 2016 as Iraqi forces battle ISIS, who overran the city in 2014. When the fighting will end is a question of weeks or months, and the winner will be the Iraqi army. But it’s tricky to talk about winners in this war. The losses experienced by the Iraqi forces are countless; the word ‘winner’ has lost all meaning. The international media focuses on civilians, who will finally get back their freedom after three years under ISIS occupation, but they are the furthest from winning. The state of Iraq will get back its city; the ISIS jihadists will reach their goal when they are killed and get access to the paradise of their perverse ideology; but the people of Mosul are losing not only their homes, but also their relatives in the crossfire when they are caught between the front lines, during imprecise mortar shelling or air strikes, or when ISIS use them as human shields. 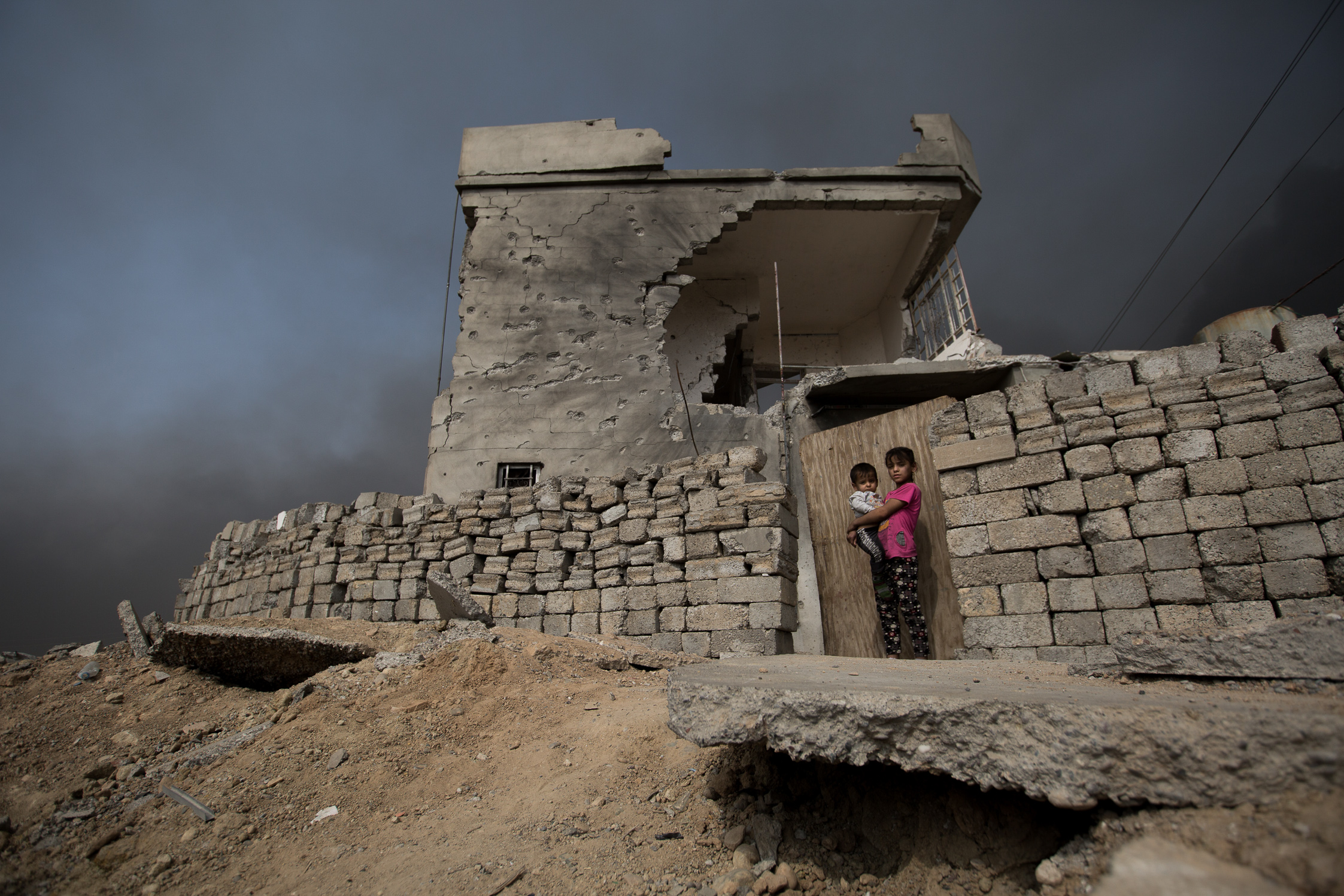 "These sisters are living with their family downstairs after a shelling destroyed the upper floor of their house. They are in the city of Qayyarah, south of Mosul, which was liberated by the Iraqi Army in August 2016 to pave a way for the Battle of Mosul. The heavens are darkened with smoke from the oil fields, still burning after ISIS set them alight as they left the city, to make it more difficult for coalition fighter jets to take aim on ISIS positions. " 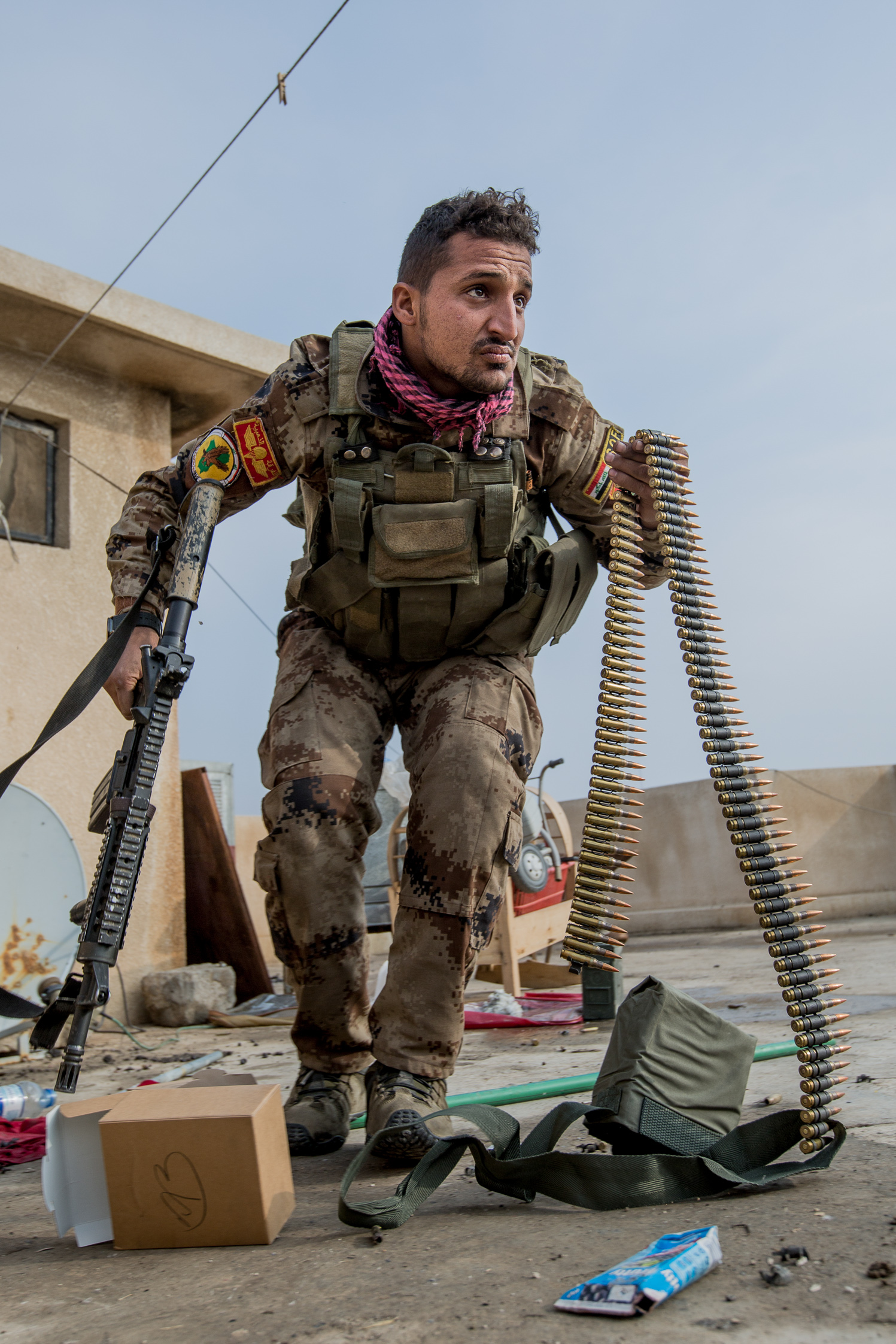 "A soldier of the Iraqi army on a house roof at the front line of a fire fight with ISIS, in the embattled district of Bark, south-eastern Mosul. While he is taking new munition supplies he has to keep his head down, otherwise ISIS snipers might shoot him." When the offensive started last year, photographers were warmly welcomed to join the euphoric beginning, to show the world that Iraq was starting to take its fate into its own hands with the Mosul offensive. But today, thousands of civilians are dead or trapped in the last embattled western part of the city. The Golden Division, the Iraqi special forces unit for the first front line, practically doesn’t exist any more because of their high losses, and the mission for photographers in this war can only partly be accomplished. Access to the front lines is only possible with deep relationships with high-ranking military leaders, or while working on assignment for big names. Too much is going wrong in this war, and too many photos are showing that to the world.

[...] I became witness to the lives of whole families changing within seconds.

Capturing the war against ISIS in Iraq is a special challenge for photographers. Besides the problems of access there is the danger of being shot, specifically by extremely well-trained and well-equipped snipers, becoming the victim of a mortar shell, stepping into a booby trap, or being kidnapped. However, these are only the dangers that are visible on the surface. Each photographer, and each writer, has to find their way through this experience without losing their mind. 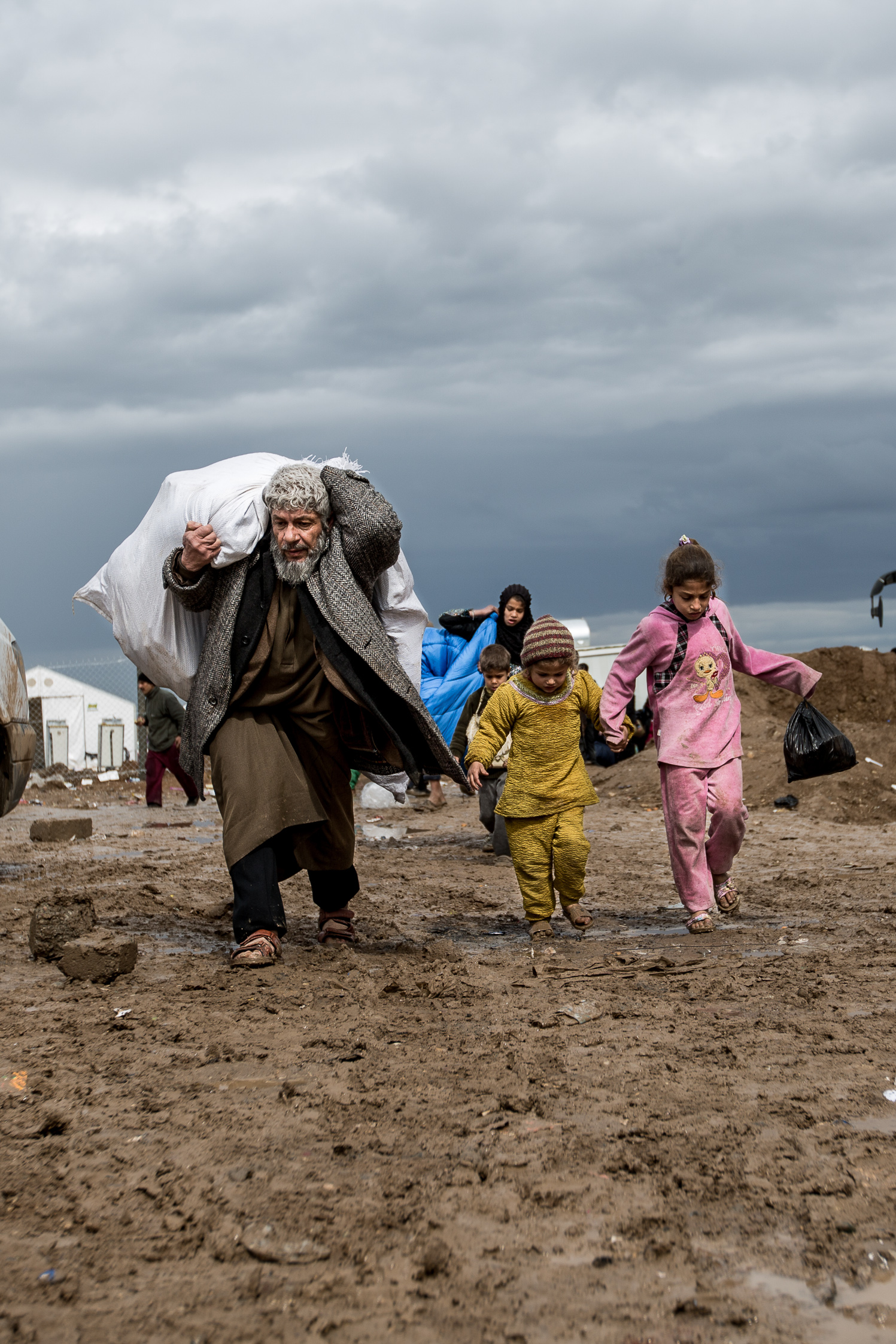 "Mud covers a refugee collection point in Hamam Al Alil, where citizens mainly from the city of Badoush gather to shelter from the fighting between the Iraqi army and ISIS. The father, on the left, wasn’t yet able to shave his beard, which is mandatory for each man who living in ISIS areas. " 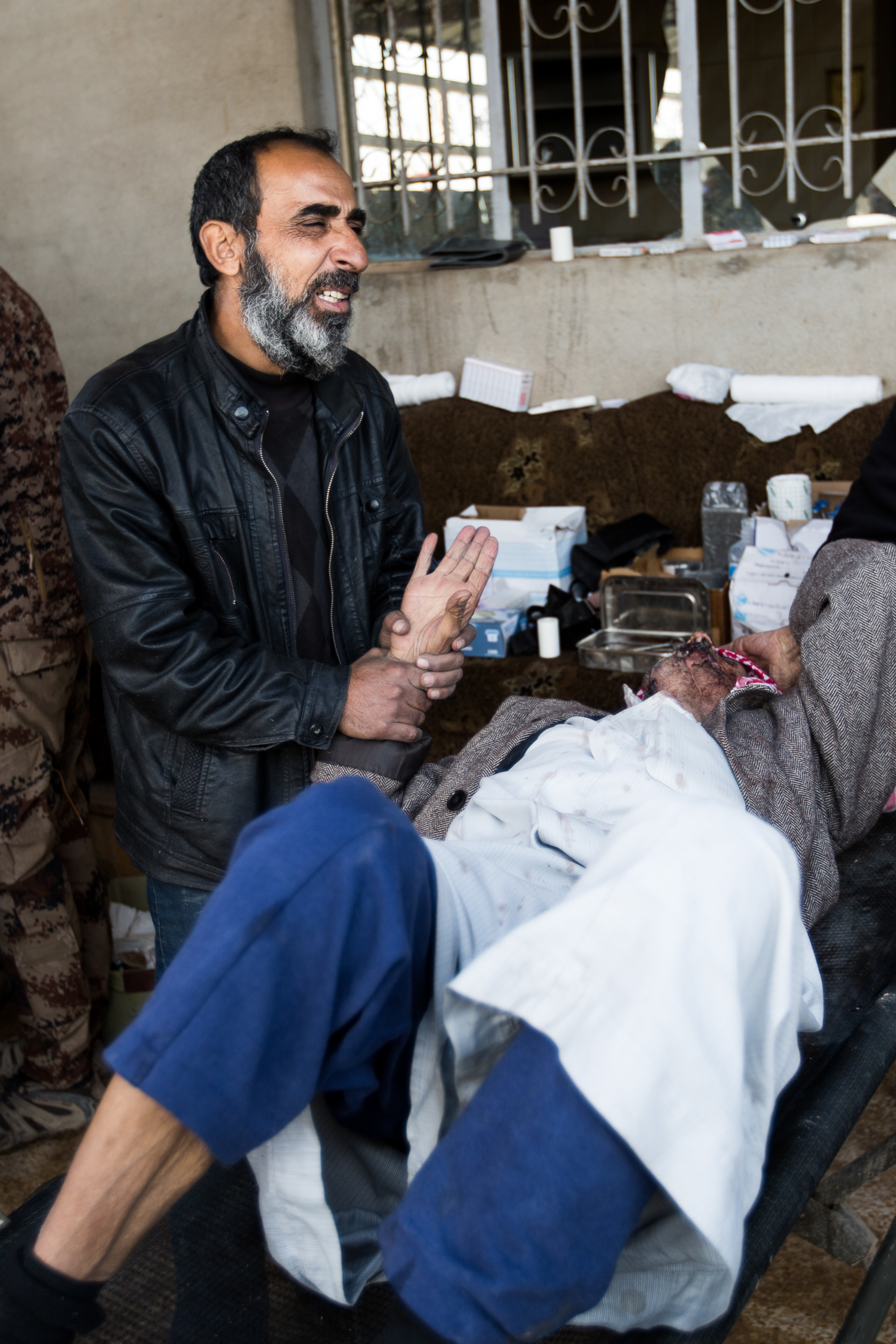 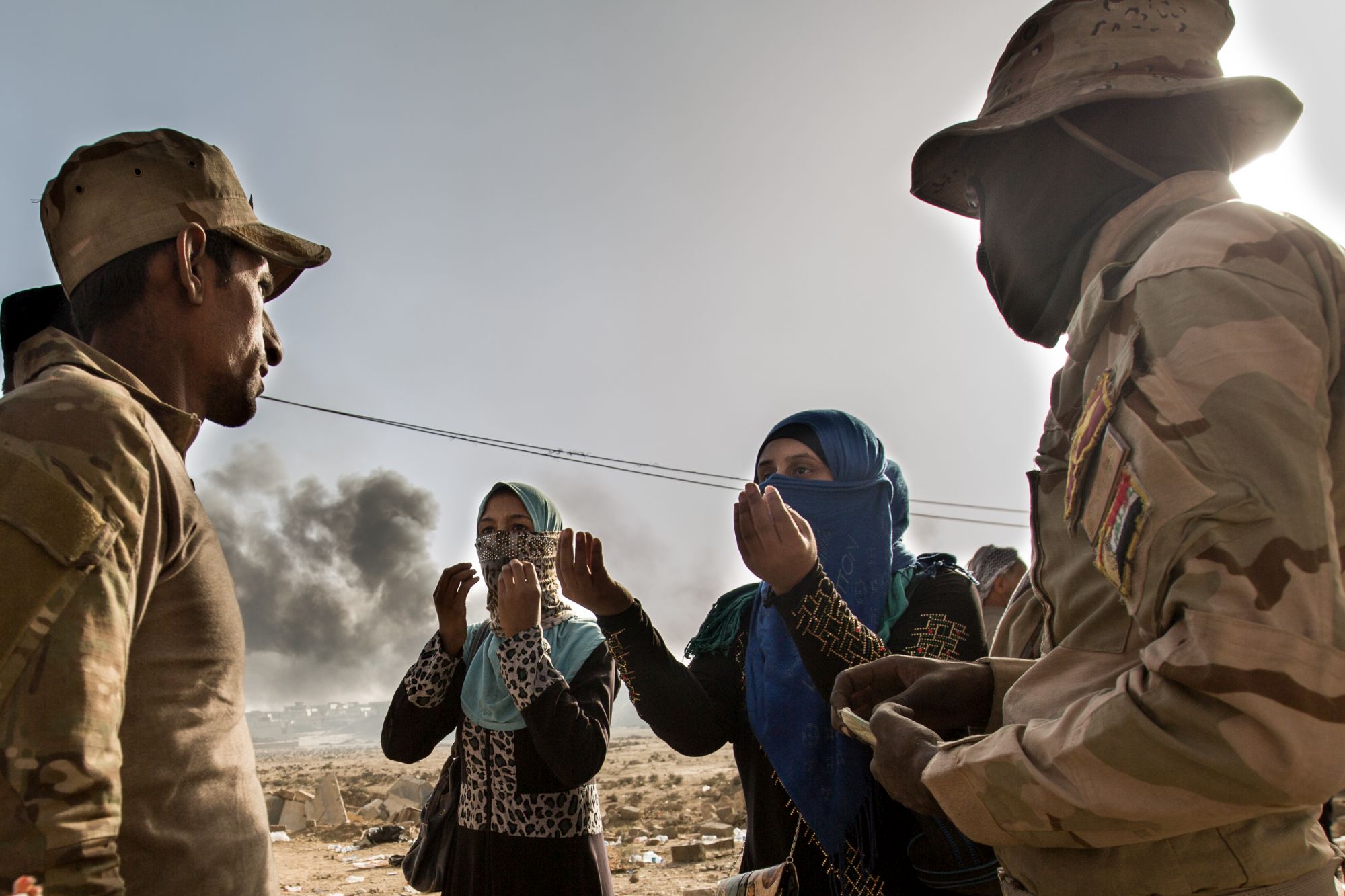 "Families flee their villages into the desert, which are affected by heavy fighting between ISIS and the Iraqis. Here, at a post of the Iraqi army, near Qayyarah, the fugitives ask for help." "A boy is treated in a field hospital in Hay Samah, Mosul after a rocket hit his family’s house injuring him and killing his grandmother. The family is living in the embedded areas and are caught between the front lines, so they don’t know if the rocket was from ISIS or the Iraqi army."

Personally, it’s hard for me to find a professional distance from some of the experiences I have had in and around Mosul during the last months. When I was shooting at a field hospital directly behind the front lines, I became witness to the lives of whole families changing within seconds. Humvees were approaching the field hospital from the embattled areas, sometimes at a rhythm of mere minutes. Doors were opened, and heavily injured civilians or dead bodies were brought to the medical staff. And around them the parents, partners or children of those dead or wounded were screaming, falling to the ground or were so shocked that they just functioned and helped where they could.

But there is one picture from this mission which will never leave me. I worked at an escape point where civilians managed to flee the fighting. A couple with their baby in their arms approached, exhausted after nearly three years under ISIS terror, and told me their life-changing story. 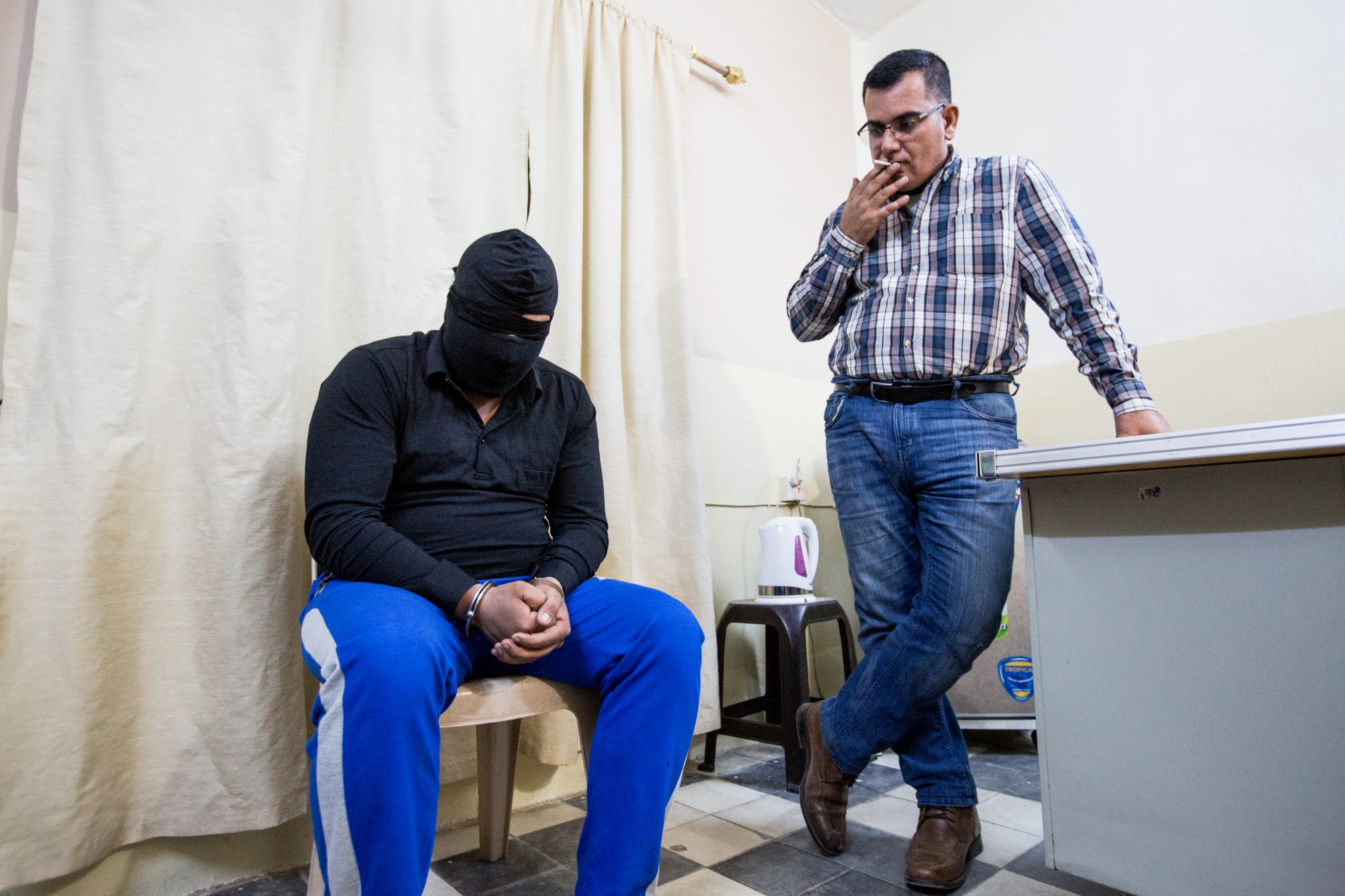 "An ISIS jihadist, who was decisively involved in the Kirkuk attacks, in a prison in Kirkuk, Iraq." 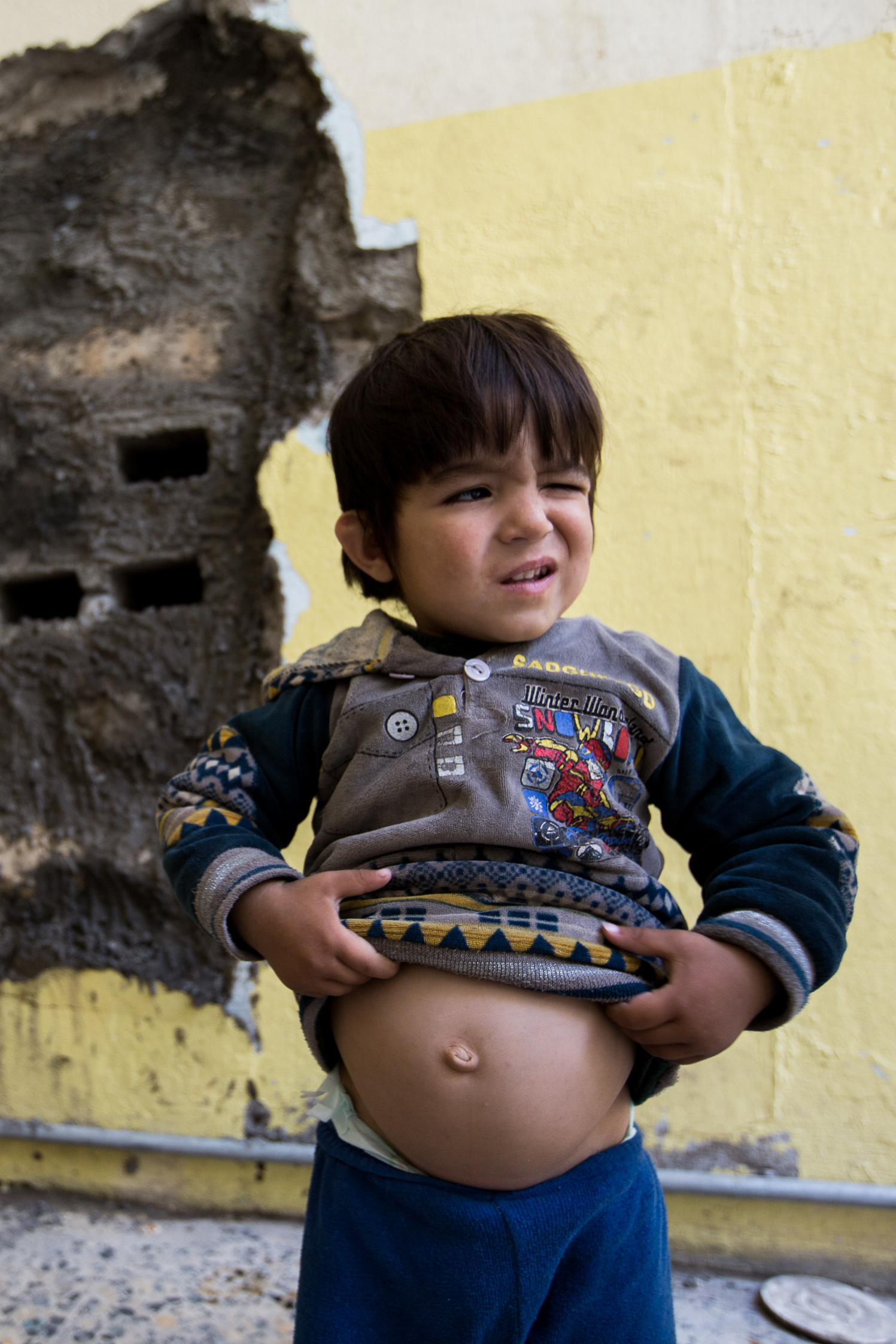 "A boy who stayed at home in western Mosul with his family, even under ISIS occupation and through hard liberation fighting.The hole in their living room wall behind him was left by a mortal shell and provisionally fixed by his father. His belly shows strong indications of malnutrition. " 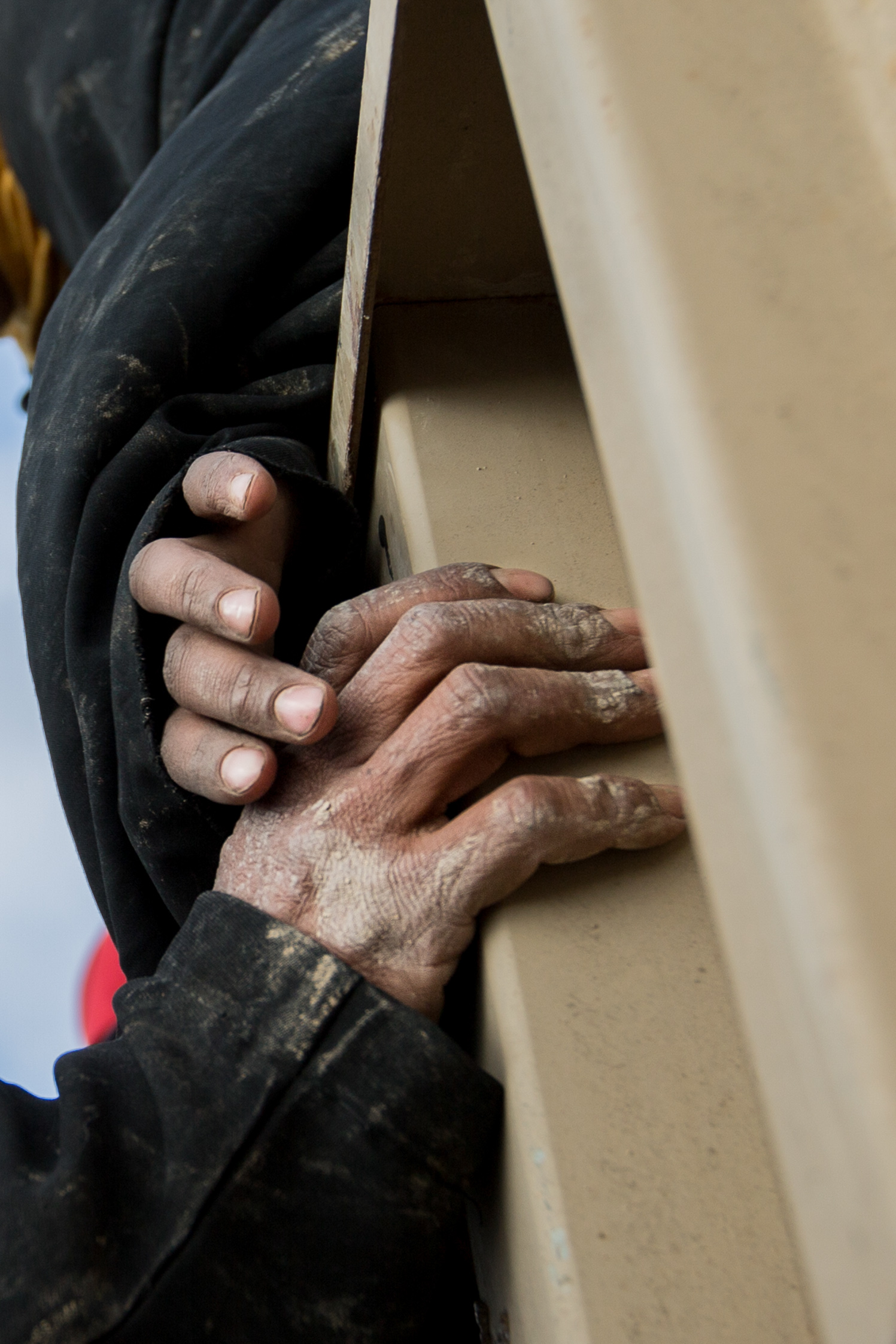 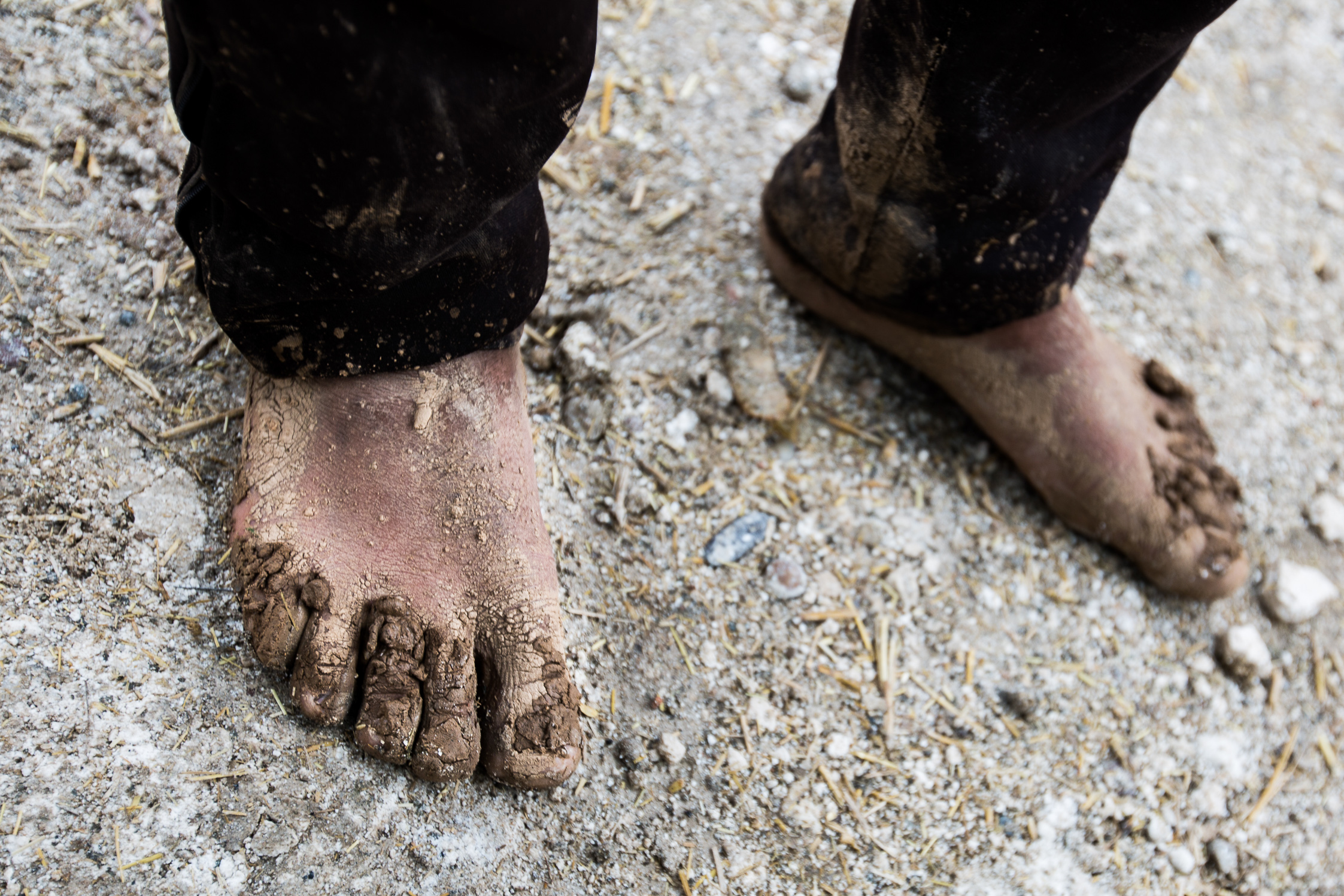 "The feet of an exhausted citizen from Badbush, near Mosul, on arriving in Tal Ghassoun after his escape. As he fled, he lost his shoes and walked for two days in the cold, muddy desert to a coordination point which is run by the Shia militia ‘Hashed al Shaabi’ and the Iraqi army." "A family is looking for shelter behind a house wall in the embattled district of Bakr, south east of Mosul, Iraq."

Some weeks previously, their baby had a high fever and they went to the hospital in Mosul, in the ISIS controlled area where they were living. The doctor asked for the name of their child and they told him, without considering that it could mean the death penalty for their daughter, her Shia name. The doctor recognised that they were not a Sunni family, and gave the baby an injection. Afterwards, their child became seriously mentally and physically disabled. I went to the field hospital with them, and after an examination the doctors diagnosed the cause of their child’s disability as a sudden intoxication, with gasoline.”

See more of Sebastian’s incredible and affecting photography at photo-backhaus.de