Birdwatching: A New Way of Looking at Our City 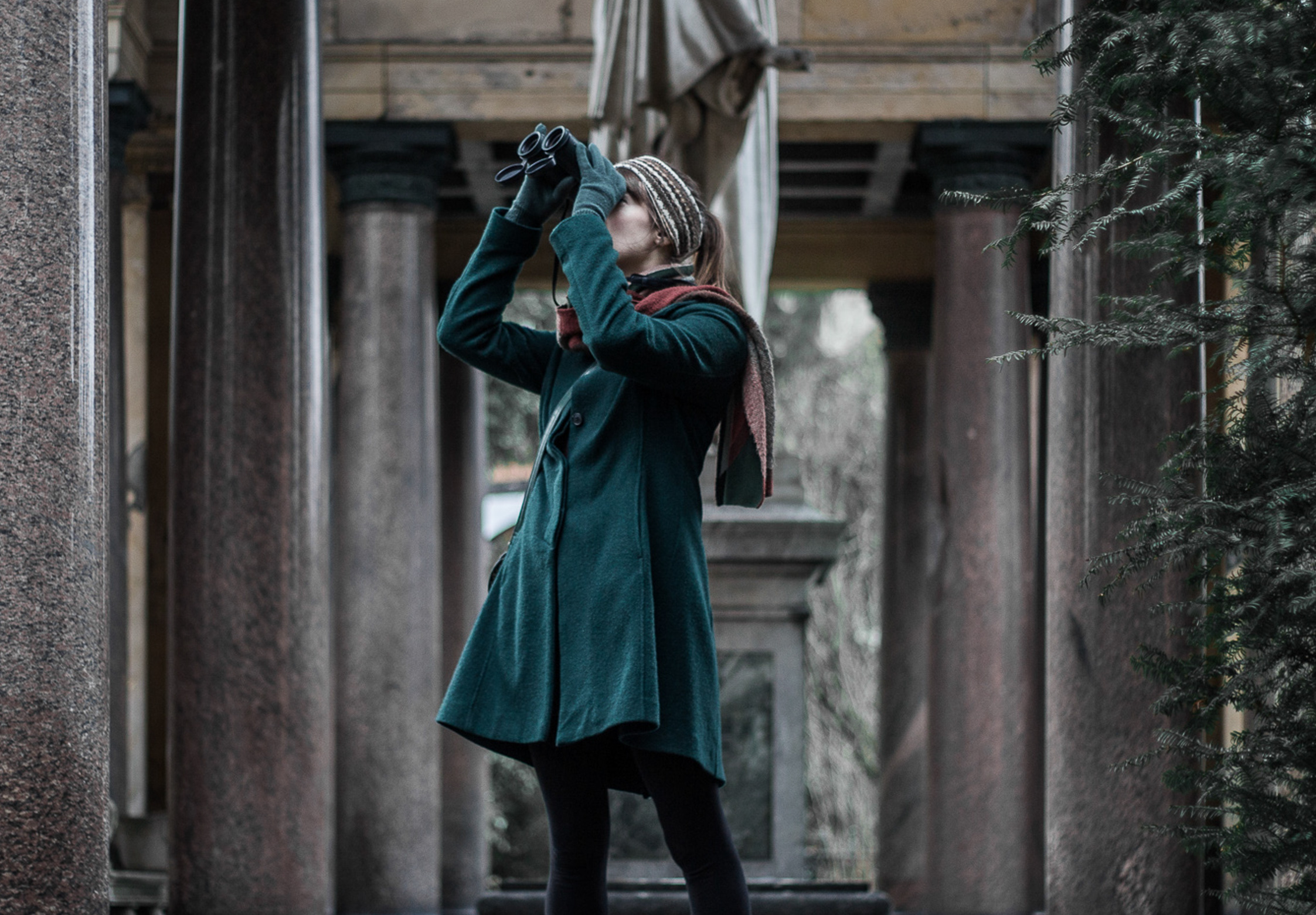 Berlin is a city that yields endless surprises. One such revelation is the capital’s bountiful birdlife; it’s a Mecca for winged creatures, both native and migratory, mimicking the international nature of the city itself. Eager to become familiar with our city’s feathery inhabitants, we go on an ornithological expedition with local birder Gráinne Toomey, and speak to avian expert Rolf Nessing about why so many birds (and birdwatchers) call Berlin their home.

On a dismal Sunday, we find ourselves in the welcoming Café Strauss, at the entrance to Bergmannstraße’s sprawling network of cemeteries. Although it is warm and airy indoors, we can’t help but feel a chill as we remember that the building was once a working mortuary.

Grim legacies aside, we’re here for an encounter that’s not morbid in the least. A few minutes after ordering coffee, Gráinne Toomey arrives. Although she doesn’t claim to be an expert, Gráinne’s enthusiasm for Berlin’s birdlife is compelling, and we’re excited to let her introduce us to this world. 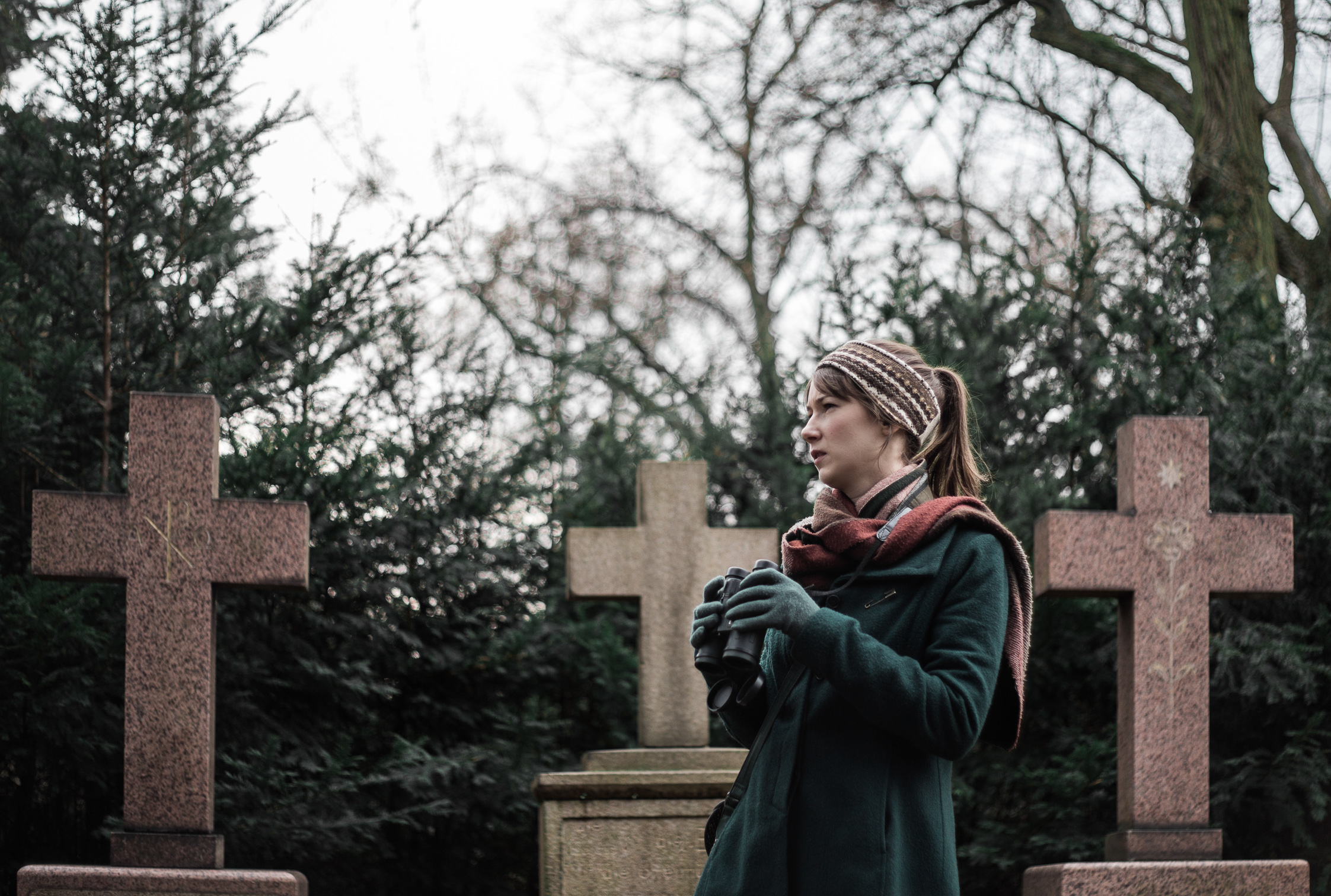 Originally from County Donegal in northwest Ireland, Gráinne moved to Berlin just over two years ago to complete a PhD in linguistics. “Finishing my research wasn’t particularly easy, especially during winter,” she says. “I don’t think you’re prepared for that when you move here. It feels like you can go days underneath these big clouds and not get any sunlight. Mentally, it’s quite exhausting.”

Gráinne begins to explain how, searching for some respite, she stumbled across the cemeteries: “I needed a distraction and I discovered this place, so I started coming here for walks.” Having grown up in the countryside, she’d been immersed in nature from a young age and was already birdwatching by the age of ten. It didn’t take Gráinne long to notice that the cemeteries were teeming with birdlife: “It’s really interesting here, there’s so much history and it’s very peaceful, and there are loads of birds.”

Berlin is brimming with graveyards – 224 to be exact. Most of these are hotspots for birds, including redstarts, sparrows and woodpeckers, not to mention the thousands of public parks inside the city limits. “Berlin is great in terms of green space, it’s not really comparable to anywhere else,” Gráinne adds. 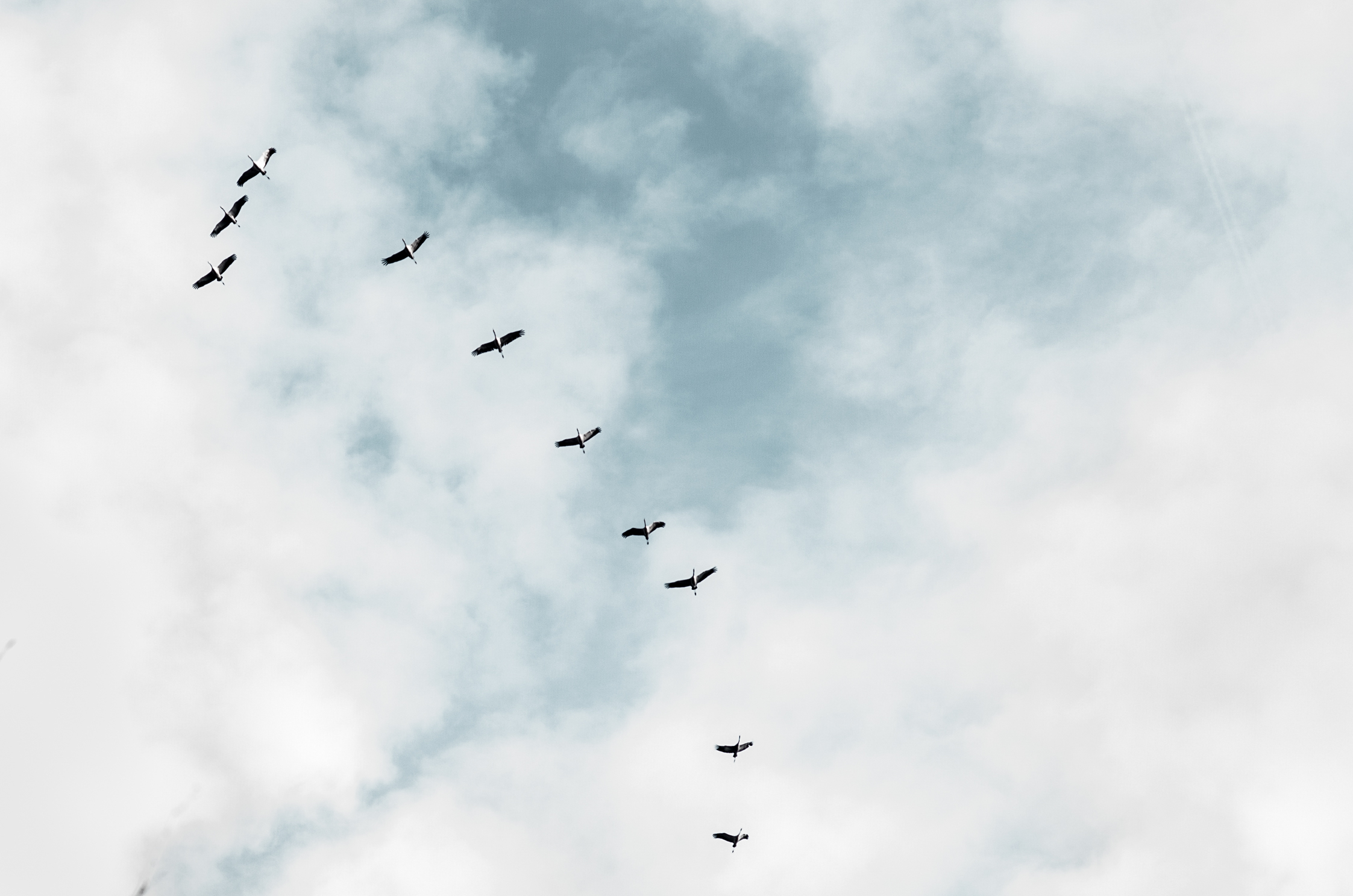 Tempelhofer Feld is a green space favoured by many Berliners, and Gráinne explains that it is prime territory for birdwatching: “Sometimes I nip there to have a look at the kestrels, you don’t even need binoculars to see them. To see these creatures just doing their thing is such an expression of freedom, it’s quite life affirming. This man-made area has become a resource for birds,” she says. “If an airfield hadn’t been there I’m certain it would likely be filled with houses now.”

But Berlin’s birdwatching isn’t just limited to the urban confines of the city. Gráinne recounts a summer trip she made to Grunewald forest: “Within a minute of arriving, a deer bounded across my path, followed by a wild boar. Then a goshawk swooped over my head, this huge, fierce animal, completely wild and free. It was like being in The Animals of Farthing Wood!”

One autumn Gráinne went further afield and visited Linum, a village beside the Autobahn on the way to Hamburg. The surrounding lakes are renowned as a pit-stop for cranes migrating south from Scandinavia in search of warmer climes. During peak time, up to 80,000 birds can be found resting there. “It’s a trek to get to, it’s in the sticks. I got the train there and cycled down this path,” she says, “but around dusk, when the cranes stream in, it’s spectacular. The noise they make is ethereal.” 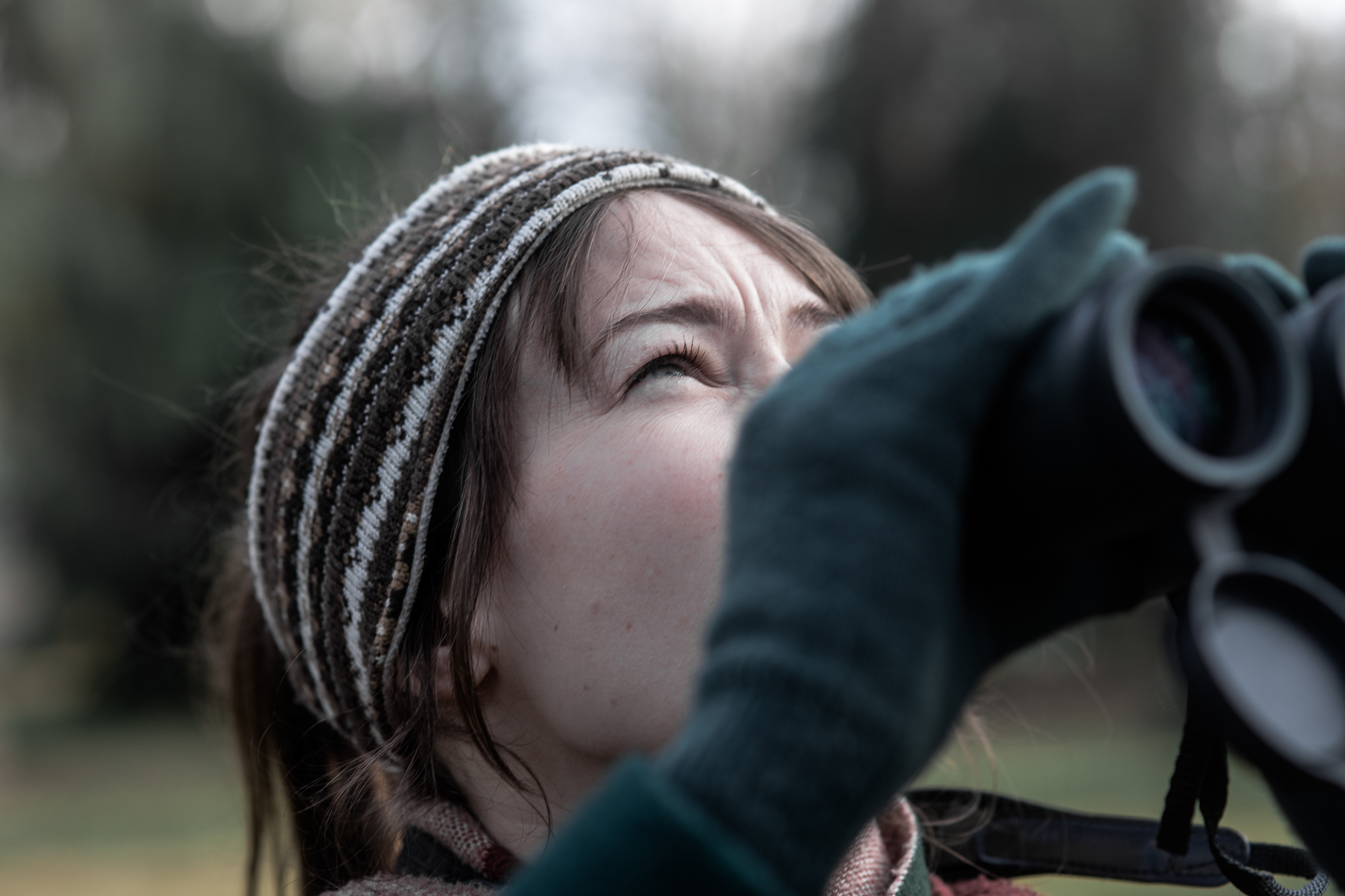 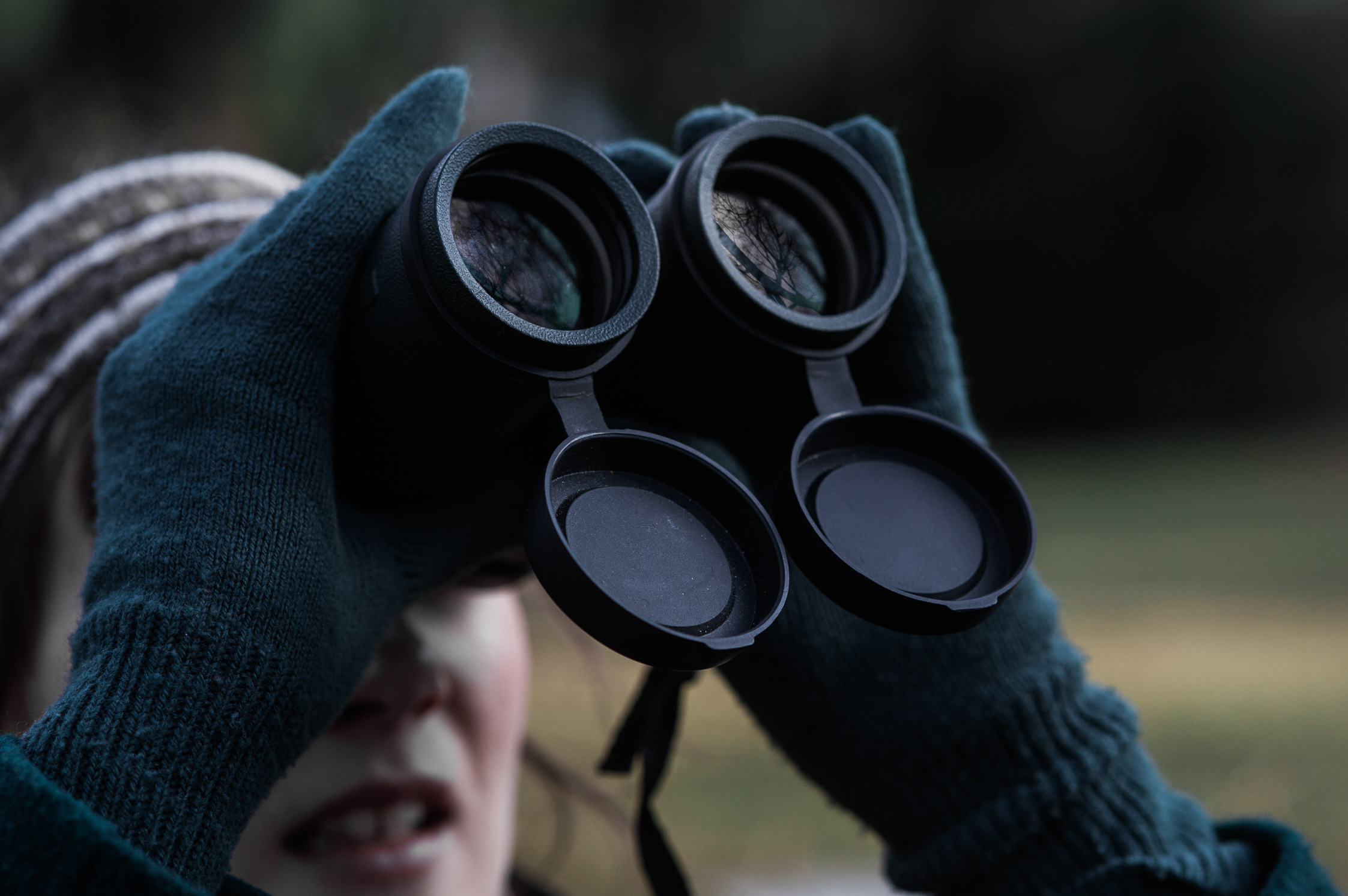 We suggest that perhaps birdwatching has unlocked an entirely different realm for Gráinne. She agrees. “Birding has made me go outside of the city and explore, but also explore within. It’s really enriched my life here and made me more positive. It’s helped me personally, but I’m sure it would rally anybody.”

Gráinne doesn’t appear to quite fit the mould of an archetypal birdwatcher, and we ask what her thoughts are on the stereotypical image of a ‘birder’. She laughs: “I’ve come across birders before who’re a little bit like Mike from Spaced, nerdy but in an army kind of way. They’ll be out there with telescopes, ticking things off methodically and saying, “That’s 35 species today!” It’s similar to trainspotting or stamp collecting. There’s a stereotype, but it’s a gentle one of eccentricity.”

Coffees finished, we step out into the chill, and as we walk to the wrought-iron gates we ask Gráinne if she’d be willing to meet again the following weekend to go birdwatching. She happily accepts.

After our discussion with Gráinne, we can’t help but notice a change in our own outlook. Faint bird calls become more noticeable, we look up far more often than usual, scanning the skies with an almost predatory zeal and looking at Berlin in an entirely new light. 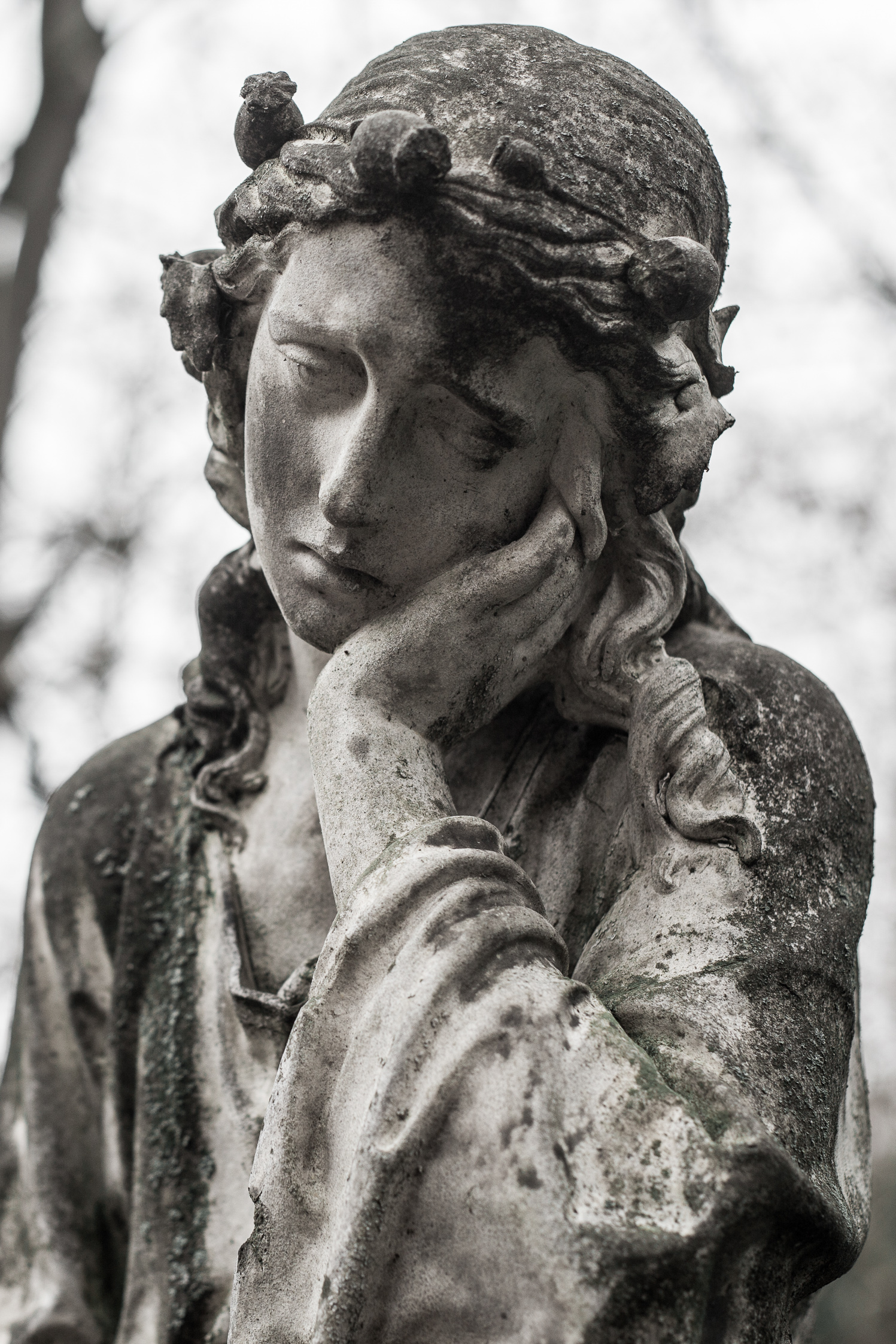 When we reconvene outside Café Strauss, it feels like a spring day; the sun is well and truly out, and the heat it radiates reignites a naïve hope that milder times aren’t too far off. More importantly, it’s ideal weather for birdwatching.

As we wander deeper into the cemetery, passing crumbling mausoleums and unordered rows of headstones, a chorus of birdsong floods the grounds. “It’s a bit of an oxymoron, isn’t it,” Gráinne says. “This place is meant to be quiet and restful but in truth, it’s filled with life.” There is something extremely profound about her words and this odd juxtaposition of human burial rites and untamed nature.

It’s not easy to safeguard nature for future generations because a lot of political decisions are very short-sighted. People are focused on other concerns at the moment, environmental issues aren’t so important right now.

Half an hour into our sojourn, a bellowing sound rings out from the heavens. “There’s a crane somewhere,” Gráinne says, pausing for a moment. It’s then that a flock of these sizeable waterbirds appear in a perfect ‘V’ formation above us. Gráinne quickly passes me her binoculars, which I aim clumsily upwards. Viewing these animals in close-up is mesmerising, their wings seemingly beating in HD unison. “I promise I didn’t schedule that,” she jokes.

Later, we watch in amazement as a pair of blue tits weave with uncanny agility through a thicket of twigs. Soon after, Gráinne points to a nearby tree. We spot a lone jay perched nonchalantly on a branch, totally unaware of our presence mere feet below. Through the binoculars, its plumage is beautiful, the blue feathers that accentuate its wings contrasting vividly against the tree’s ashen bark. Just as the image comes into focus, the jay flutters off. “That happens a lot,” Gráinne says with a smile. 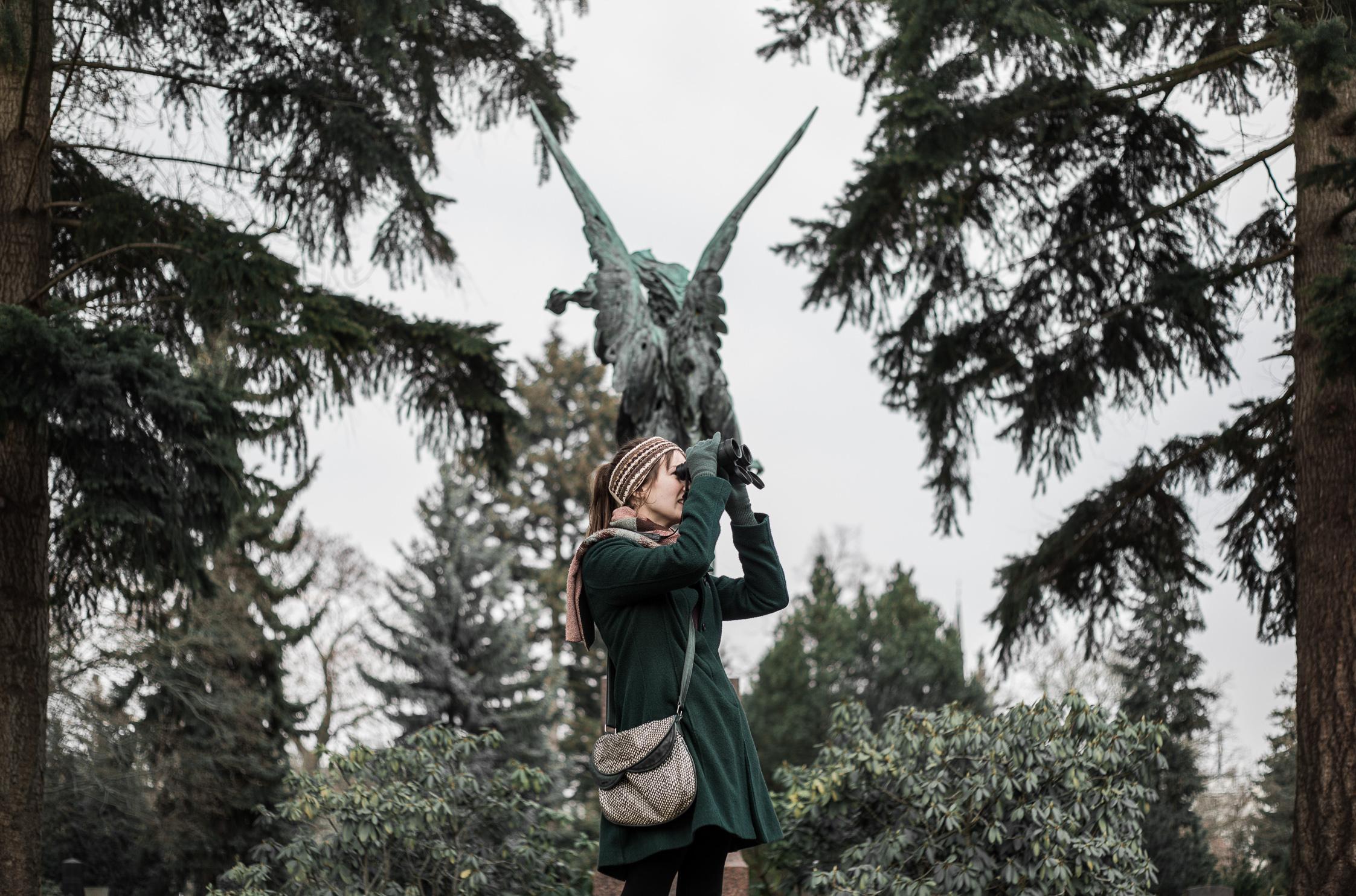 We spend the rest of the afternoon meandering through this tranquil place. On the prowl for a woodpecker, we venture to the cemeteries on Mehringdamm. Although our quest is unsuccessful, Gráinne takes the opportunity to show us where the late composer Felix Mendelssohn is buried. When she sees a hawfinch glide overhead for the first time ever, we’re comforted by the knowledge that the day’s exploration wasn’t just for our benefit.

Curious to find out more about birdwatching in Berlin, we contact Rolf Nessing. Based in Lychen, a tiny town in Brandenburg’s picturesque Uckermark region, Rolf is a bona fide bird buff and tour guide. He starts off by telling us how he first began birdwatching when he was 13. “I’m 58 now, so that’s about 45 years ago,” he says. “A long time!”

Between 1982 and 1992, Rolf worked as a government-employed conservationist: “I started out birdwatching then found my way into nature conservation, which I took up professionally. I ended up working in protected areas throughout Brandenburg, mainly at breeding grounds for rare birds including eagles, cranes and black storks.” But something was missing: “Government work meant a lot of paperwork, which wasn’t for me. That’s why I started freelancing in ‘92.”

Birding gets you more involved with your environment, and it reminds you that humans aren't everything.

Opting out of political bureaucracy, Rolf established Birding Berlin in the early ‘90s, offering English-speaking bird tours throughout the city and beyond. Roughly half of Rolf’s customers come from the United States, the other half consisting of Brits. “Most of my guests send me a list of 8 to 15 birds they want to see,” he says. “I can plan a trip around where to find them because I know many of the region’s forests and lakes, and where the birds go to hunt.”

Between March and April, Rolf organises goshawk tours in Tiergarten. Berlin has the most concentrated number of these birds of prey in the world. “The city has about 120 pairs of breeding partners,” he notes. By contrast, Britain has approximately 280 nationwide. “My guests arrive at Schönefeld in the morning, I’ll pick them up and we’ll go birding. After seeing the goshawks, they’re happy, and in the afternoon they fly back to the UK!”

We ask Rolf what makes Berlin and Brandenburg unique when it comes to birdlife. “The big difference rests on the division between East and West Germany. We live in what used to be the DDR,” he says. “We’re not so developed in this part, agriculture and pesticide use was and is far more intensive in the West. That’s why we have a lot of birds here. If you look at a distribution map of birds you’ll see the old border!” 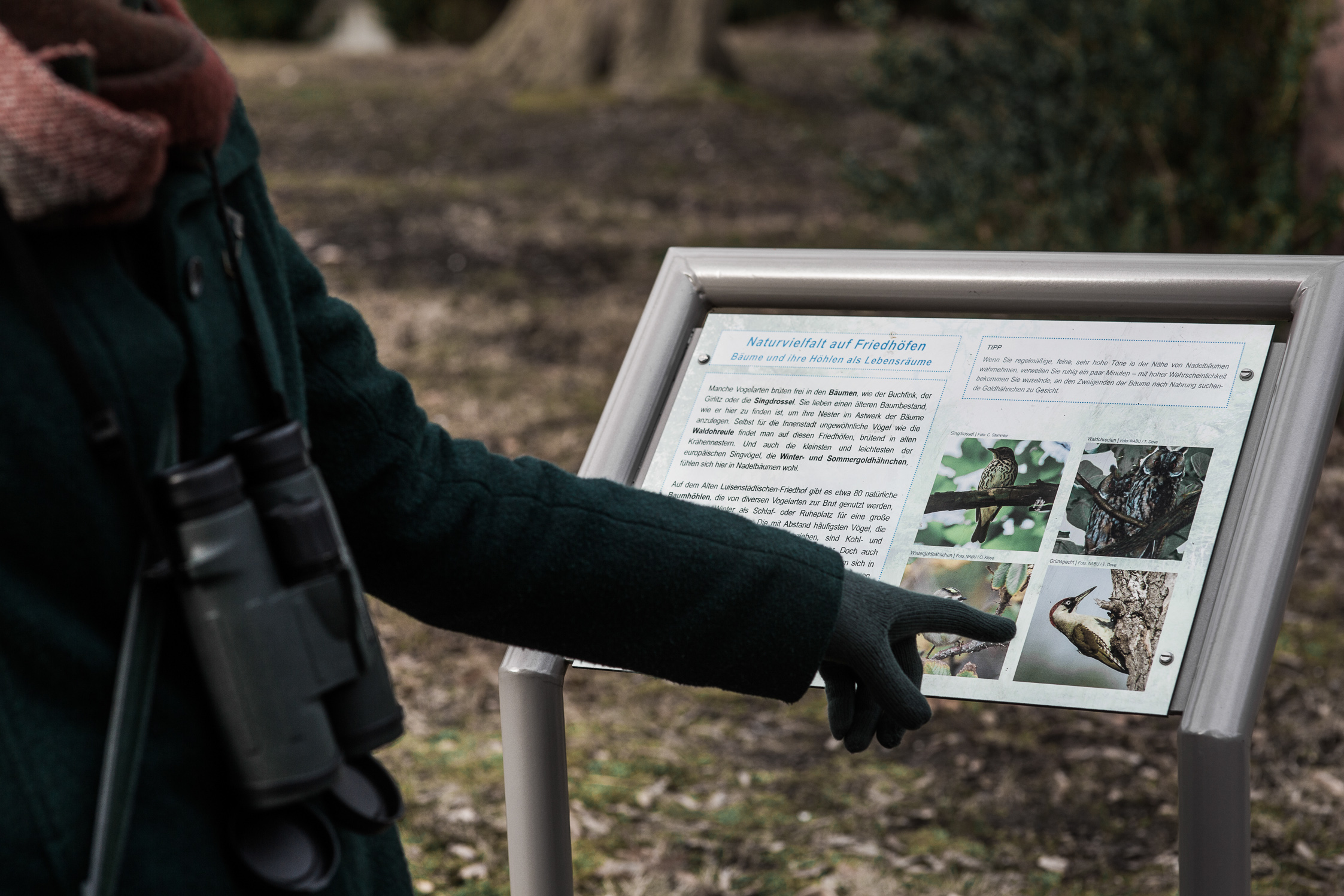 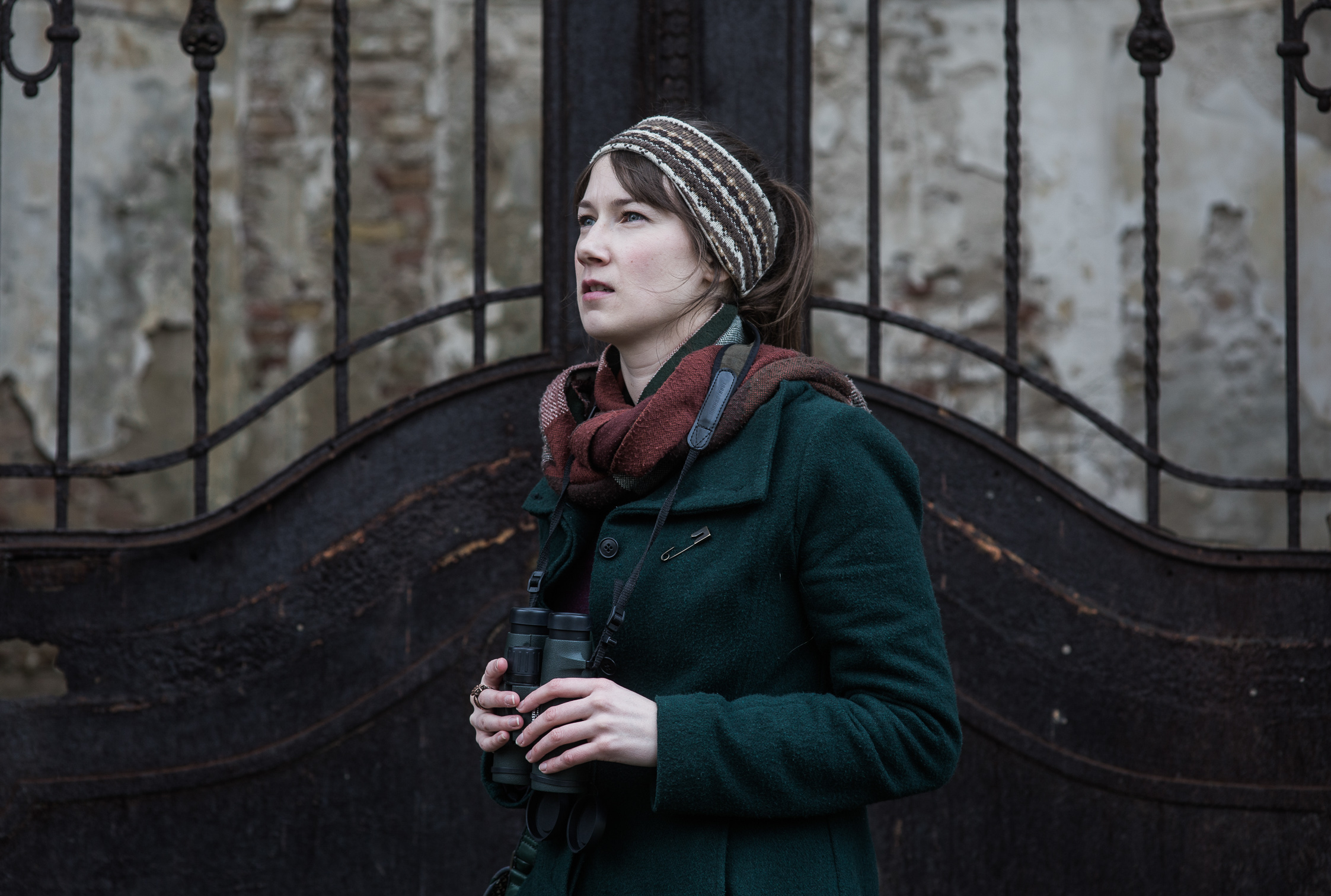 On top of these unintended Cold War consequences is the fact that there are 46 Important Bird Areas (IBAs) strewn throughout Brandenburg. IBAs are politically-defined conservation sites where birds and other fauna are shielded from agricultural expansion. “There are a huge number of protected areas here. We have biosphere reserves as well as national parks. Berlin is a very green capital too,” Rolf says.
Given the somewhat inevitable creep of peri-urban growth, we wonder whether Rolf has any concerns about the future of this natural paradise. “Right now we have a lot of problems with farming, especially the cultivation of corn for biofuels,” he says. “It’s not easy to safeguard nature for future generations because a lot of political decisions are very short-sighted. People are focused on other concerns at the moment, environmental issues aren’t so important right now.”

It’s engrossing to chat to someone as enthusiastic as Rolf. He confirms Gráinne’s account of Linum’s massive crane exodus and gives us an intricate, seasonal index of Brandenburg’s wildlife. Armed with such an expansive ornithological knowledge, we quiz him on whether he has a favourite bird. “A lot of people ask me this,” he says, chuckling. “Maybe the bullfinch. It’s a very smart bird, with its red breast and green head. But it’s a bad singer! Still, I like it, it gives me the feeling of spring.”

After speaking to Rolf, we remember something Gráinne said when we first met a fortnight ago: “Birding gets you more involved with your environment, and it reminds you that humans aren’t everything. We’re all part of this one big ecosystem. Why not get out there, explore it and relate to it a bit more.” We couldn’t agree with her more. 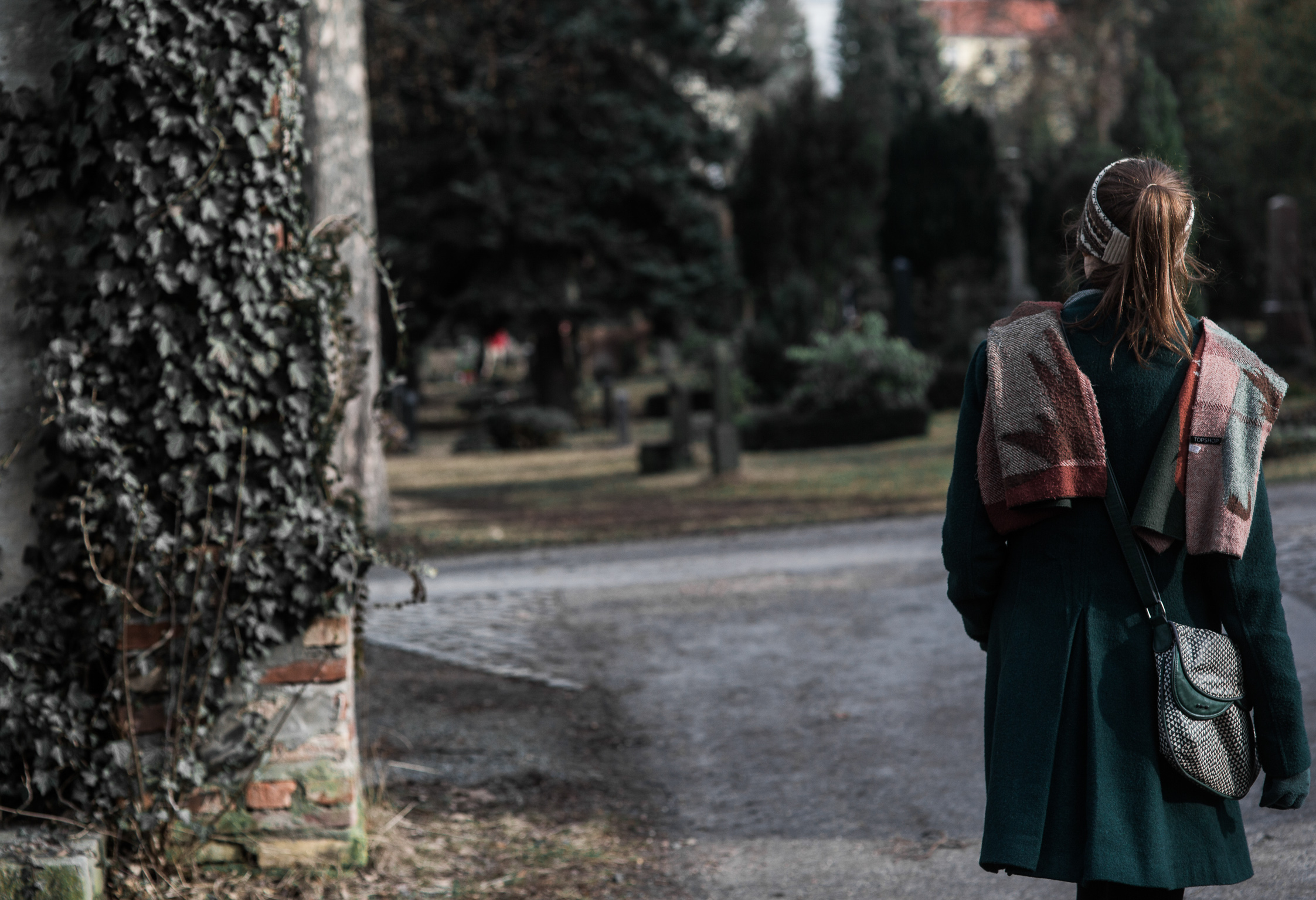