When It All Began

Day one in Trump's America 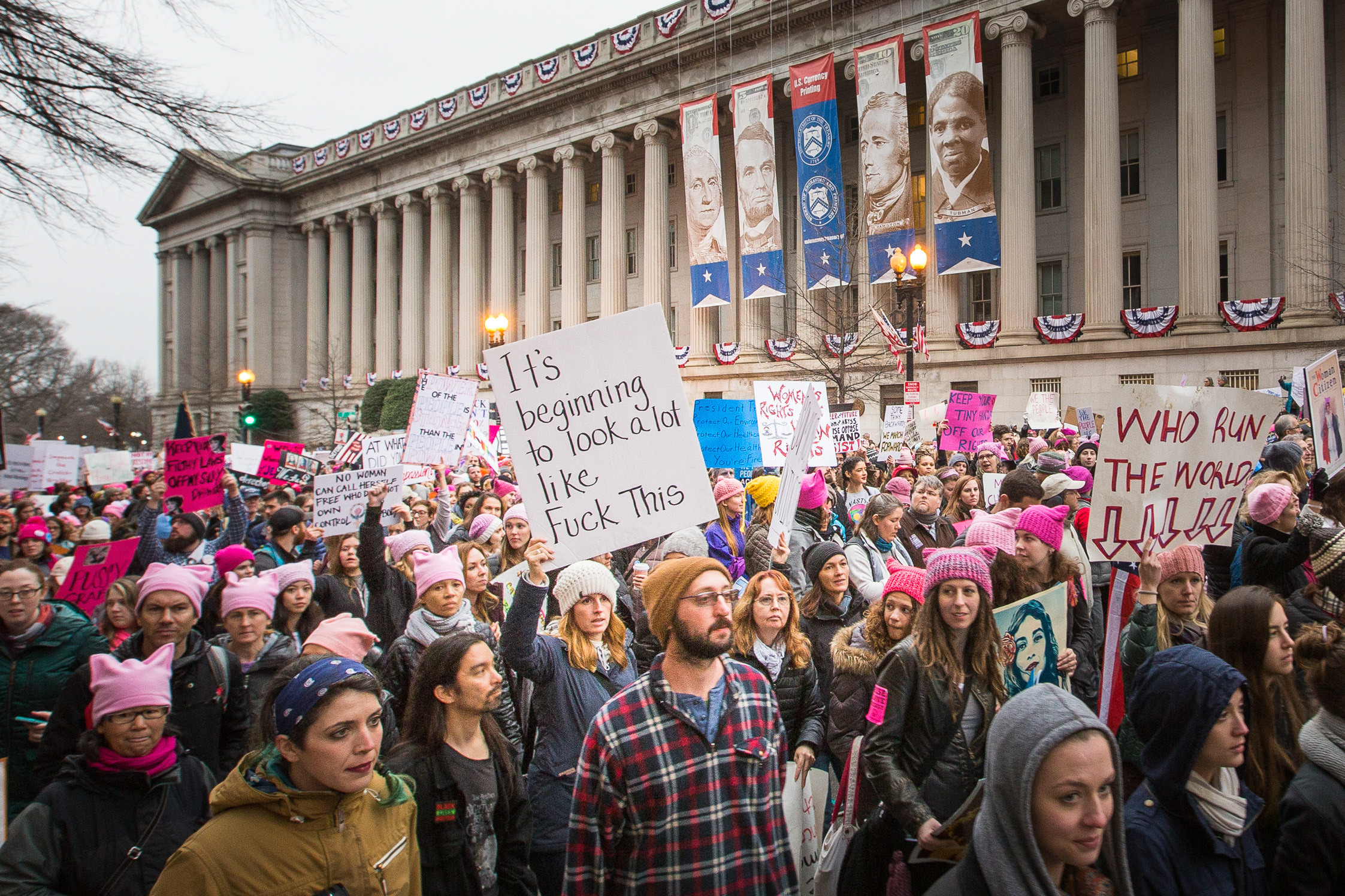 United States President Donald J. Trump took office on January 20th 2017, marking the beginning of a turbulent new presidency. As supporters gathered in the capitol, a powerful resistance was amassing. Jessica Reys Sondgeroth and Roman Petruniak took to the streets of Washington, DC to document the mood on what would prove to be one of the most contentious presidential inaugurations in US history. 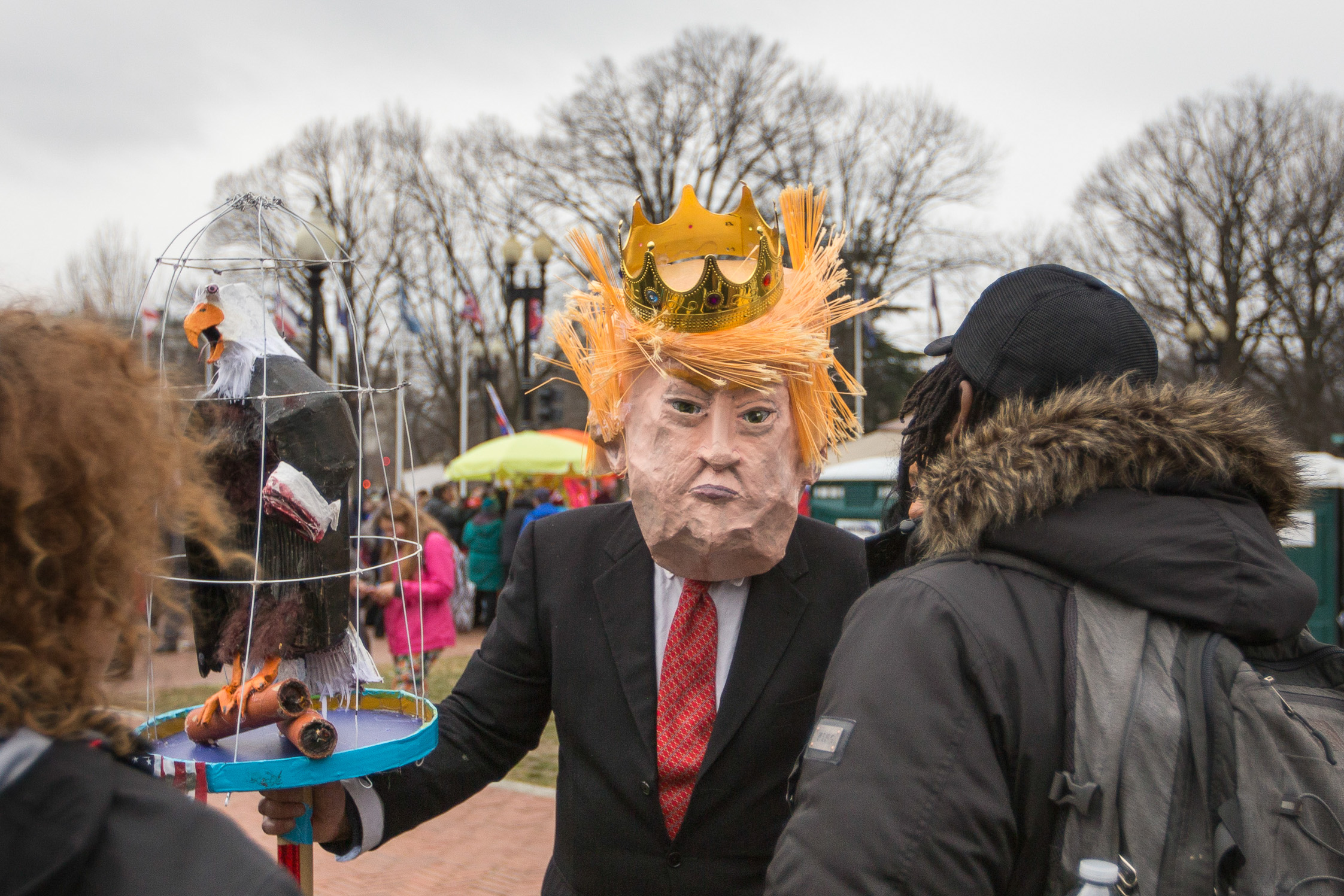 In the moments leading up to the beginning of the ceremony, the streets south of the US Capitol Building, where Trump would deliver his address, were sparsely peopled. The lines that took attendees through a brief security screening were just four or five people deep. Most people seemed to arrive on shuttle buses at Union Station, north of Capitol Hill, as protesters scattered around Columbus Fountain. Meanwhile, other DC metro stations were rather quiet, with trains less crowded than on a typical morning commute, or before a Washington Nationals hockey game. Those travelling to the inauguration ceremony itself were mostly white and often older, some with families in tow, while those protesting the newly-elected president were of mixed ethnicities and backgrounds and mostly in their late teens or early 20s. To be honest, it was all rather lacklustre; the streets were not very crowded, there were no chants or obvious excitement – people were mostly just hoping it wouldn’t rain.

DC metro stations were rather quiet, with trains less crowded than on a typical morning commute, or before a Washington Nationals hockey game.

As we approached people for comments, some were willing to talk, but there was a general apprehensiveness towards ‘The Media’. I felt a little nervous, a little unsure as to how receptive people would be. We were dressed plainly, but introducing ourselves often incited tension. I could see people begin to relax as I asked more questions, but I felt they were trying to decipher what my intentions were. When I asked if they were hopeful for the future, however, they perked up, strengthened by their convictions. “It’s about standing up, taking our country back, making America safe again. We have to be vigilant against terrorists,” Billy Prickett, a biomedical engineer from Wilson, North Carolina, said. “I think America is not safe; if you look at all of the terrorist attacks that we’ve had that have been downplayed, I think it’s a very serious issue. America needs to open its eyes.” Pickett’s claim is not unique, and has been circulating among conservative groups and websites. In fact, it was later reiterated by President Trump himself, just before the White House issued a list of 78 terrorist attacks it says went unreported by the media.

The list has been largely renounced by the American press, with many outlets including The New York Times making a point of noting “what the list excluded: attacks targeting Muslims, the overwhelming majority of Islamist terrorism victims.” The list is part of President Trump’s reaction to a massive wave of opposition to his January 27th executive order restricting legal immigration from seven Muslim-majority countries.

Despite Trump’s statements to the contrary, the vetting process for immigrants and refugees to enter the US is already extensive, and it can sometimes take years. Deaths caused by violent jihad are also far less common than those caused by other forms of violence in America. Yet, for many Americans, the threat from foreign Islamic terrorists is paramount in their minds. 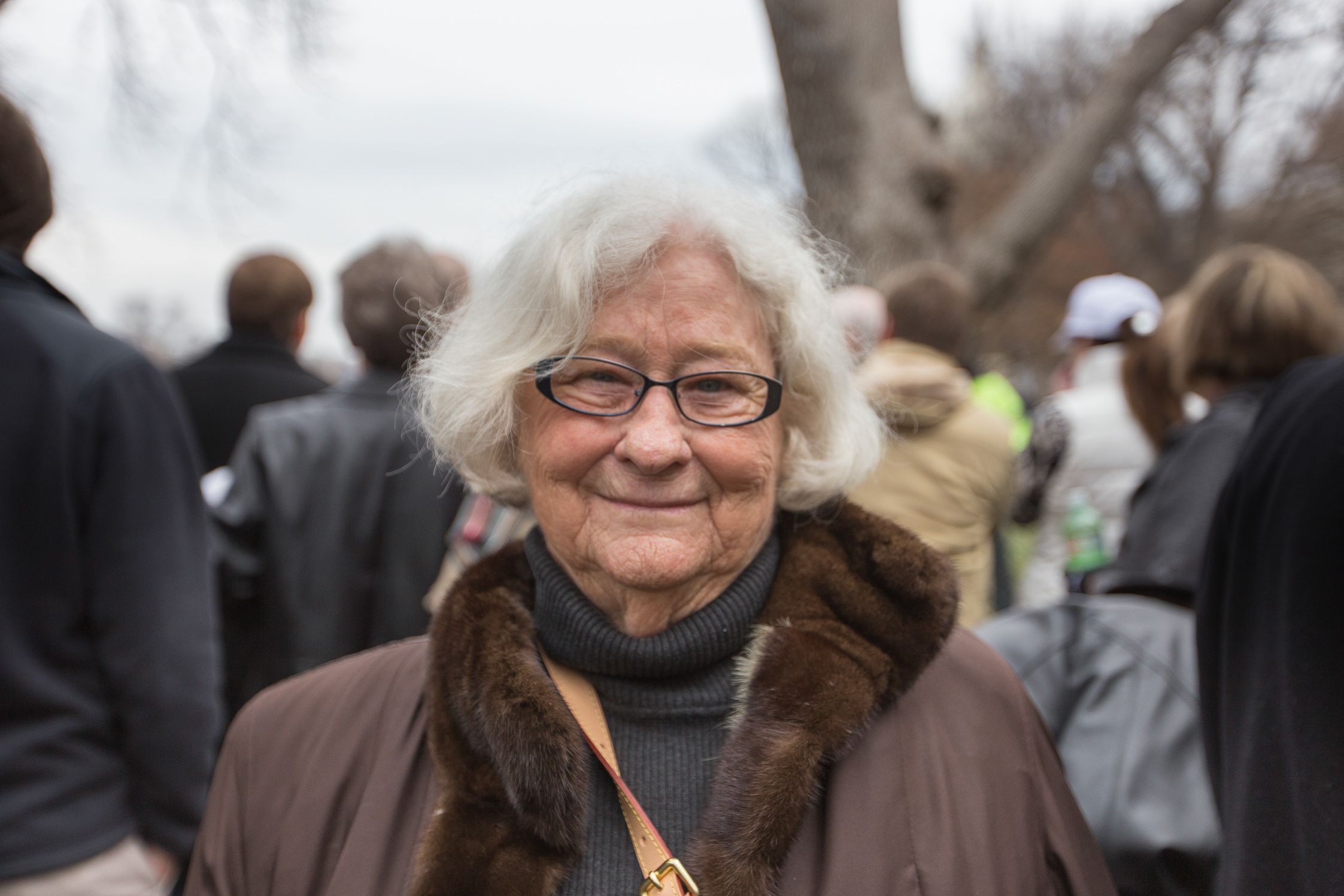 Nelda Thompson, a founding member of the Hermitage Artists Retreat in Englewood, Florida, attended the inauguration because she is “Passionate about this country,” but her words quickly turn to an ominous danger: “We must be more careful, more diligent about who comes into our country, that they come here because they want to share our ideals; we’re ready to fight for [our ideals] morally, physically, spiritually, verbally.”

Thompson’s fears stretch beyond physical violence and echo a common thread in the conservative media – that the growing Muslim population and Islam’s legal system somehow pose an ideological threat to the American tradition. 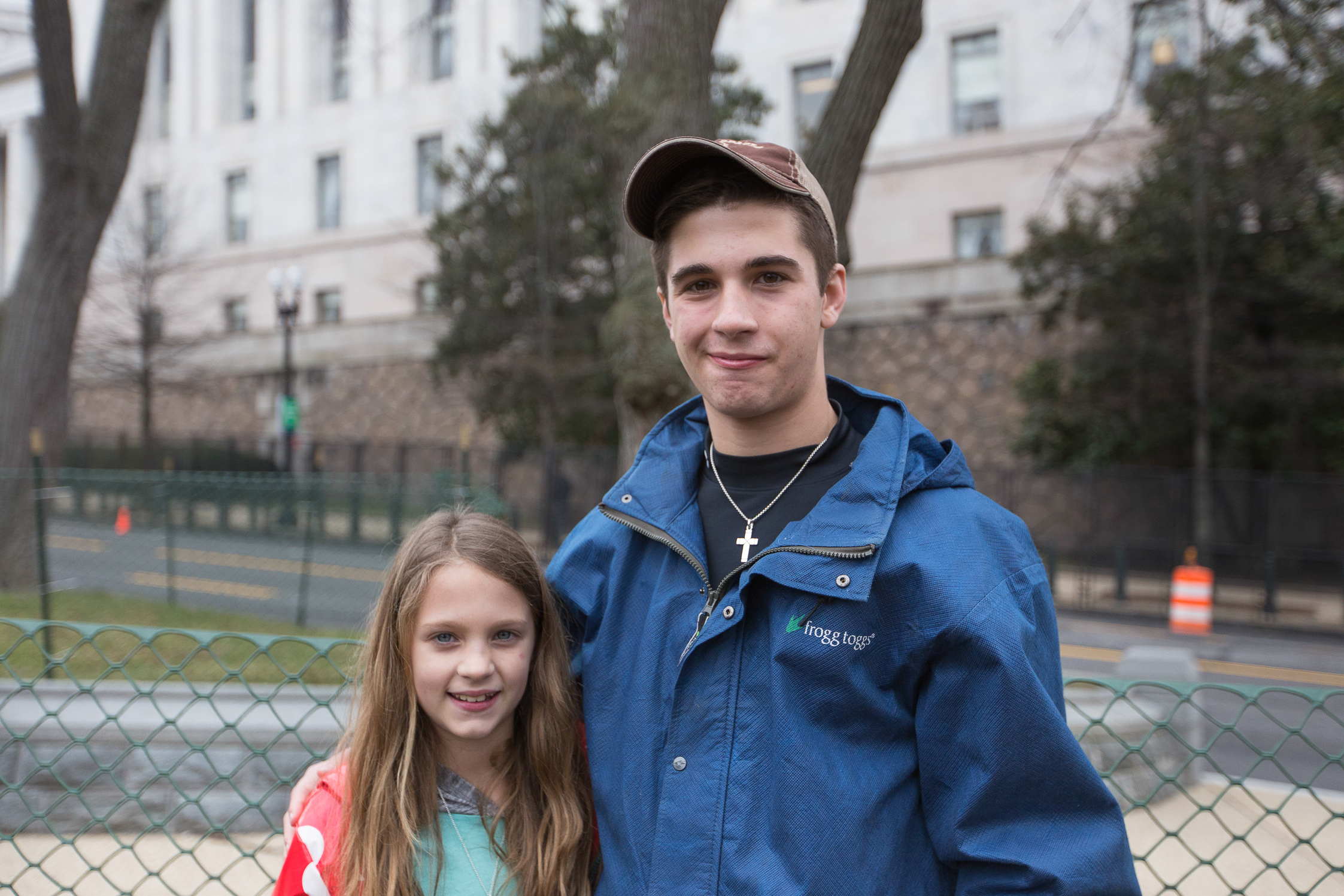 John Thomasson, a high school freshman from Fairfax county just outside Washington, DC, represents the younger wing of the party. His father is Chief of Staff for Republican US Congressman Jodey Arrington of Lubbock, Texas. Hailing from a state that shares a border with Mexico, border protection and national security are also big issues for Thomasson, but so is maintaining a strong relationship with Israel.

“As a Christian, being friends with the Jewish people, it’s a very momentous thing and America has always done that, but I also feel like it has very biblical effects when you make them your enemy,” he said. Thomasson’s father and mother are also Trump supporters, and having recently moved from Lubbock, Texas, to Fairfax County, Virginia, he’s noticed his classmates tend to have more liberal politics, like their parents. “I like Trump, I believe in what he’s doing,” Thomasson said. “I think that he likes to put up a front as a dumb, irrational man, but he’s a very smart guy. He knew how to work the election – the entire thing ended up being centred around Donald Trump.” 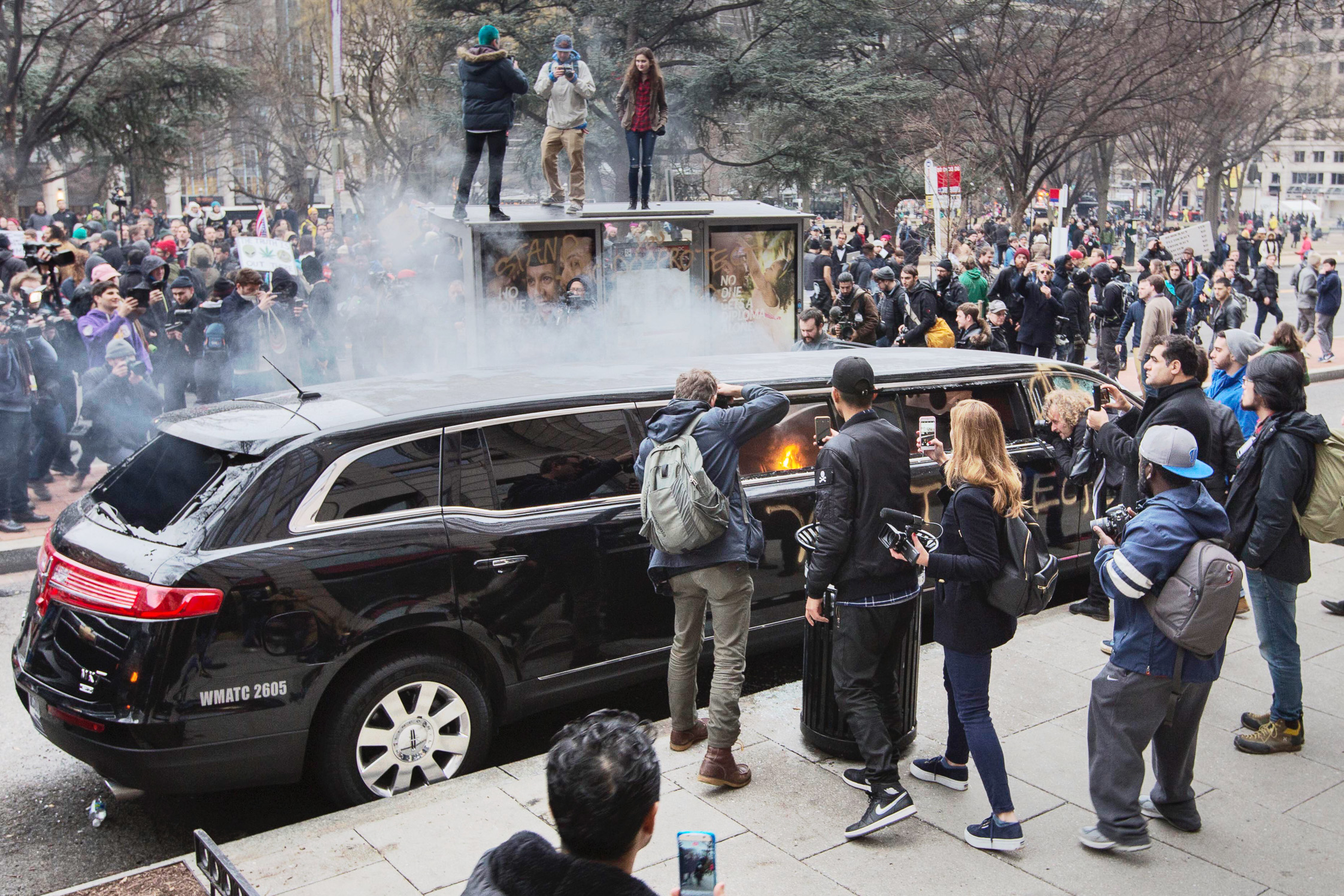 Anti-capitalist protests erupted, destroying the windows of a Starbucks and the Bank of America. 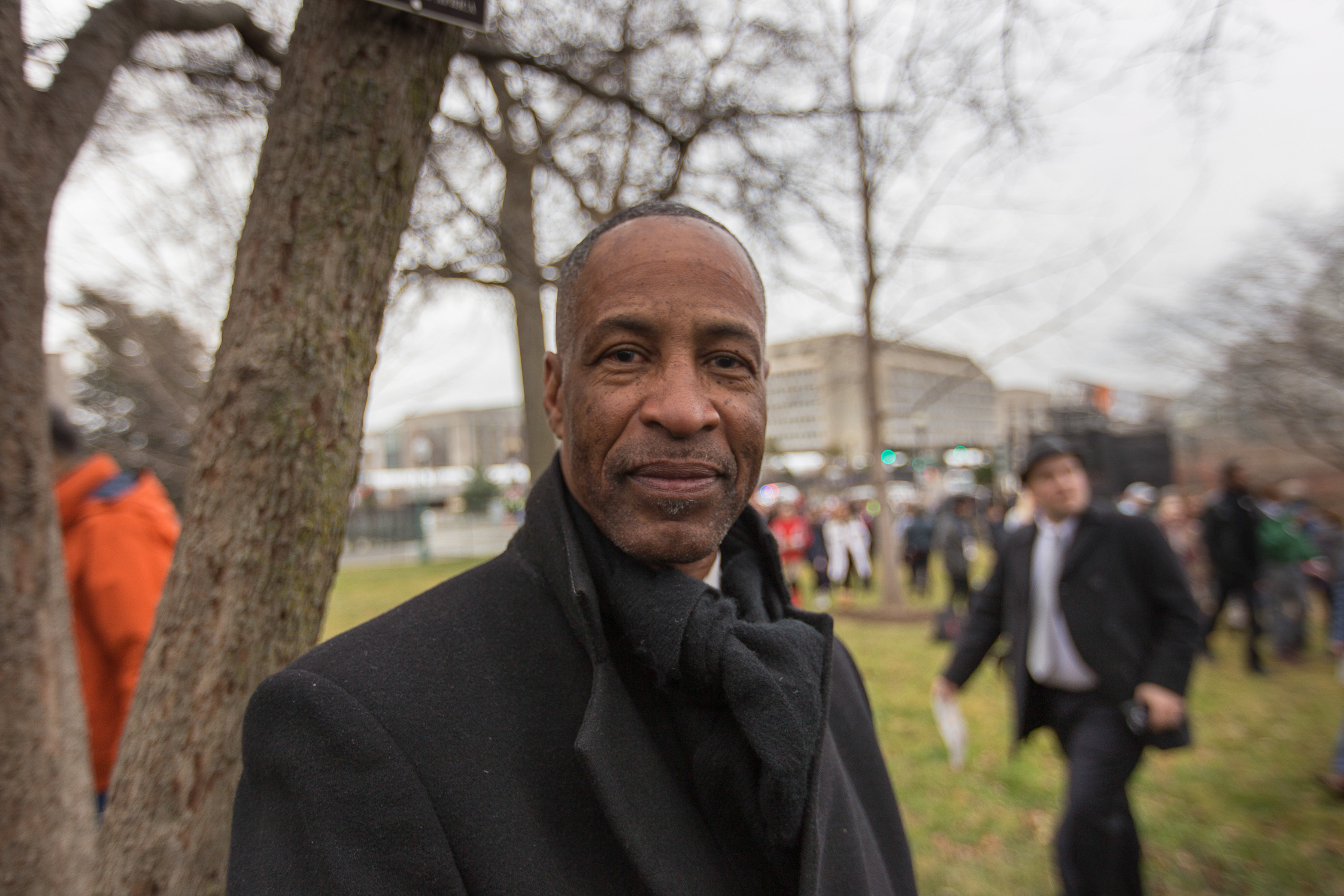 While those attending Trump’s inauguration were mostly white, that is by no means the entirety of President Trump’s following. A few faces stood out in the crowd who represented the true diversity of America.

Bobby Cunningham, a deputy commissioner for the State of Alabama Department of Agriculture and Industries, said he originally supported Jeb Bush for president and he’s still “heartbroken” over the candidate’s loss. Still, Cunningham said he rallied around Trump when the Republican Party selected him as the nominee. However, there was still some reservation in his voice as he emphasised the importance of checks and balances in the US government. “There’s only so much a president can do,” he said. “We have the greatest government in the world – there’s no one mindset that can overthrow everything we worked so hard to establish in this democracy.” 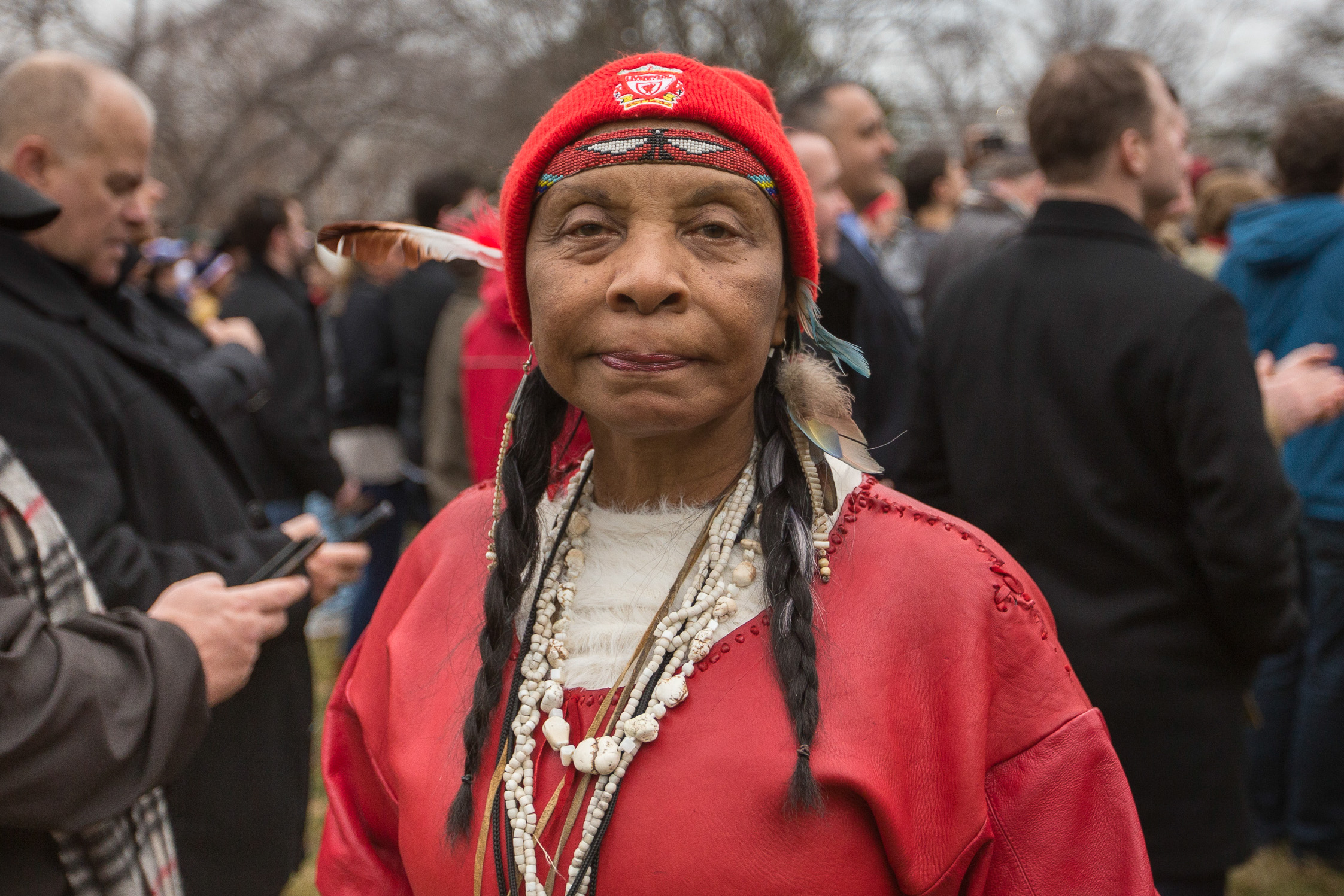 Cherokee Hill, a woman whose first name befits her heritage, is from Union City, Georgia, outside of Atlanta, and she’s been a Republican all her life. “I’m here today wearing my colours of red for love and white for purity and protection, symbolising a covering over him in prayer and in good blessings for him and his family,” Hill said. “I look to the person, I look into the heart of the individual and that’s where I get my direction, firstly from God, and to the heart of the person that’s running.” 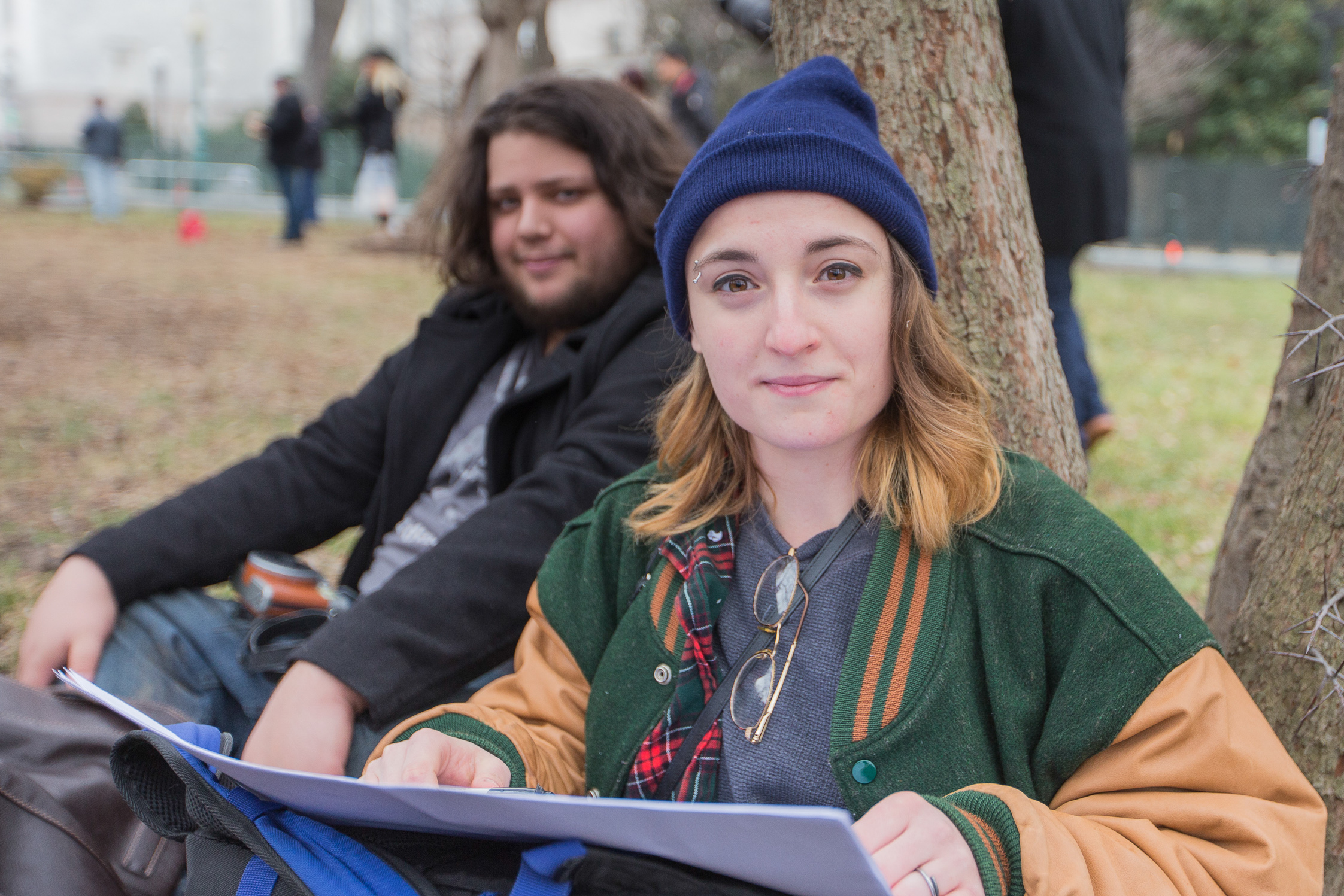 Leonard and her friend Alex Nichols

A smaller group attended in protest and out of sheer curiosity. “The white giant has spoken up and now we have to respond to that,” Lana Leonard said. Leonard and her friend Alex Nichols, both in their early 20s, came from New Jersey to protest the inauguration. Sitting against a tree behind the crowd, Leonard carefully penned the words ‘Not My President’ on a poster board. Unlike the others in attendance, who were mostly calm and content, Leonard was visibly tense.

“I’ve never seen so many Trump supporters in one place and it’s nerve-wracking. As a member of the LGBT community, it’s frightening,” she said. “There just seems to be a lack of depth and thought about what’s going on, about Trump’s policies.”

Amy Powell, an artist from Ohio, was in Washington, DC visiting friends when she offered to take somebody’s picture. Powell ended up befriending the individual, a Trump supporter, who gave her a ticket to attend the inauguration ceremony. “I was very honest with him and told him that I did not vote for Trump, but I’m here, taking pictures and taking it all in,” she said. “It’s crazy because my experience with Trump supporters was that they’re usually very friendly and very nice, and it’s really confusing to me how they could vote for this guy.” 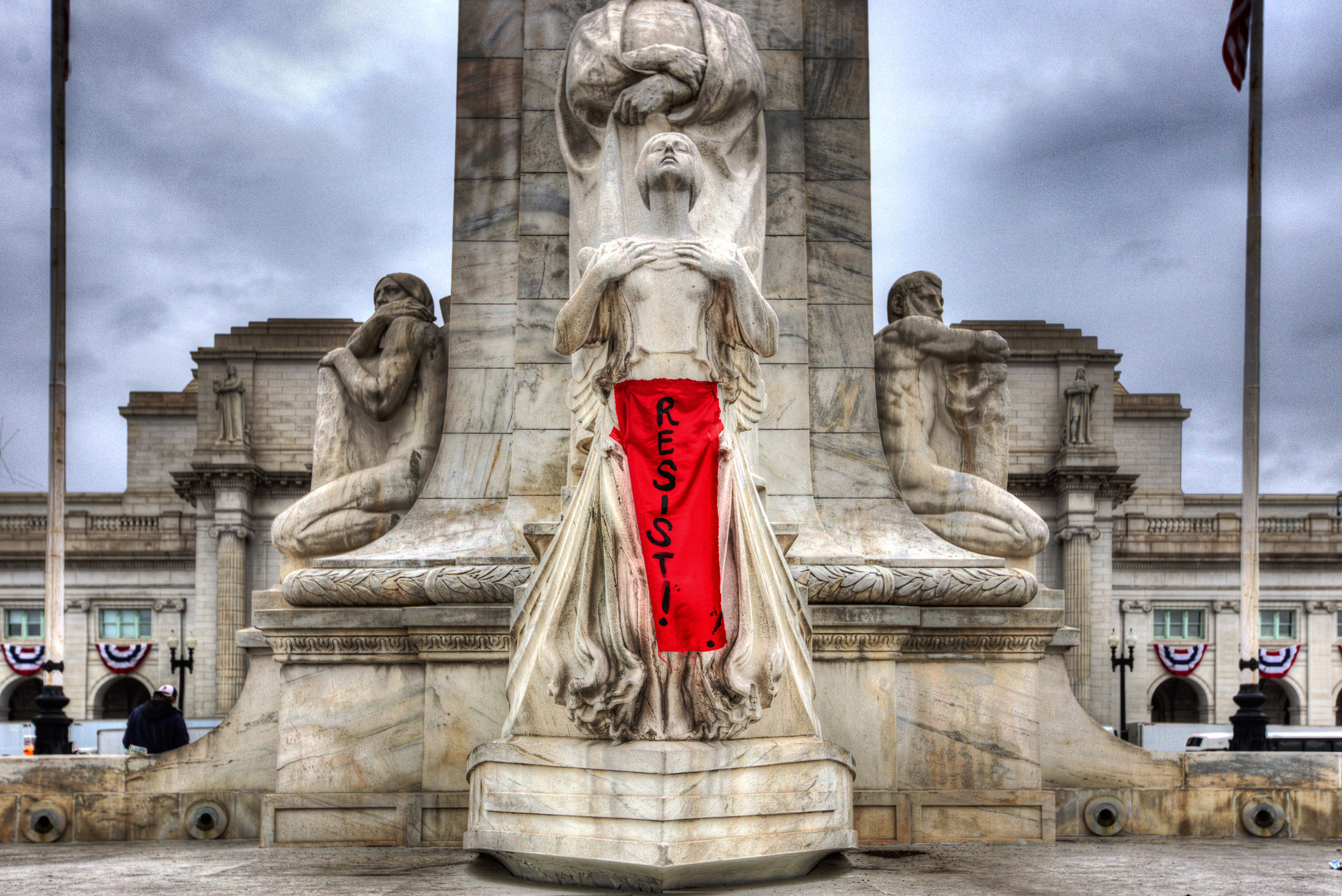 Powell said she was particularly surprised at the women who support Trump, given his remarks that include grabbing women by the “pussy” and his conservative stance on restricting government funding for Planned Parenthood, a non-profit organisation that provides reproductive health care and abortion services. “I do truly believe that Trump supporters really believe that he is going to make the country a better place,” Powell said. “I think that they’re wrong, but I don’t consider them my enemies, I just think that we’re going in the wrong direction and we’re going to hopefully turn this around in four years.”

The division between supporters and non-supporters became ever more apparent to us at Union Station. Trump supporters, often donning their signature ‘Make America Great Again’ hats, returned to board trains, buses and shuttles. A few dozen protesters stood, some wearing costumes, bearing banners and signs that said ‘We won’t go back’ and ‘Love Trumps Hate.’ Trump supporters often stood a safe distance away, reading the signs and staring, or simply walking through the scattered crowd. Protesters stared back, with few words passing between the two groups. 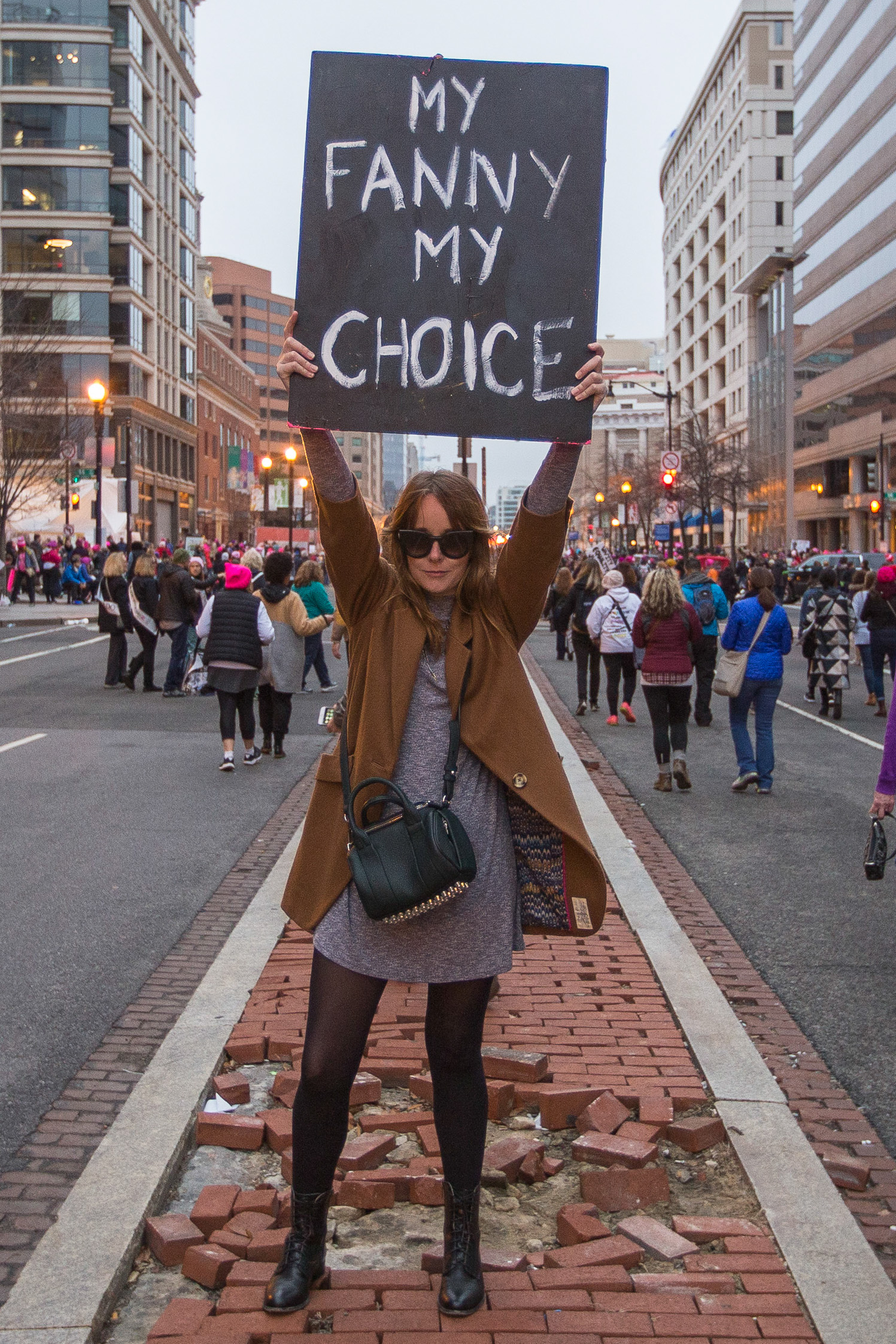 Meanwhile, northwest of Capitol Hill, anti-capitalist protests erupted, destroying the windows of a Starbucks and the Bank of America. Agitators hid their faces behind black bandanas and lit trashcans – and in one instance an entire limousine – on fire. But most demonstrators were peaceful, linking arms to face a line of armed police officers. Some would be arrested, but the entire day’s events would soon be overshadowed by one of the largest protest marches in DC’s history: the Women’s March. This event would galvanise a hail storm of protests across the country, and indeed the world, in response to a string of executive orders issued by President Trump in the first weeks of his presidency.

White House Press Secretary Sean Spicer would later claim that the president’s inauguration ceremony gathered, “the largest audience to witness an inauguration, period.” Trump himself would claim that as many as 1.5 million people attended the event. With the tally of Women’s March attendees tripling estimates for inauguration attendance, it would be the first time the new White House would be less than truthful, but not the last. 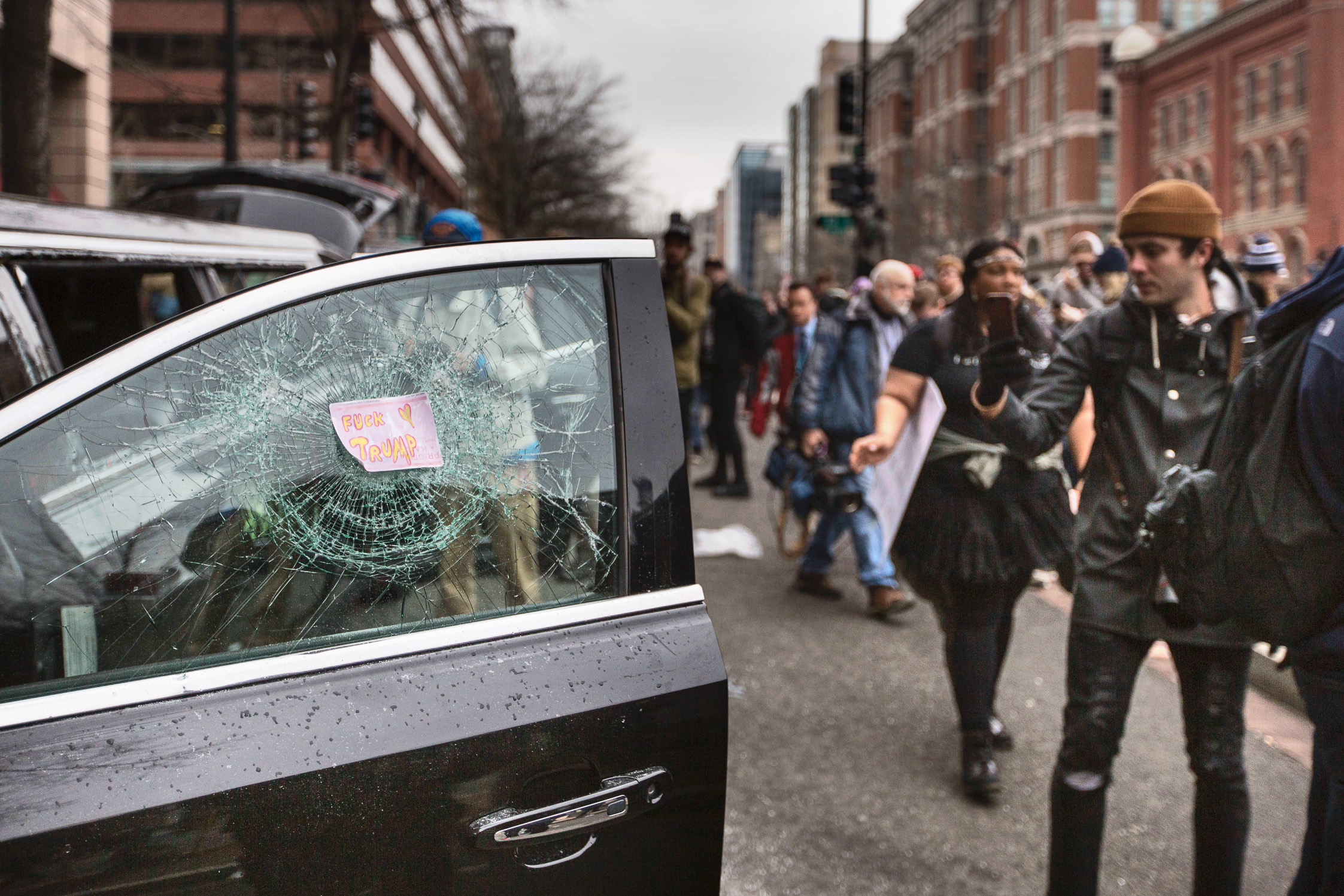