From April 5 to 6, the Disruption Network Lab will bring together a number of journalists and thinkers who risked their lives writing about the crime and corruption in the global finance sector. The conference, Dark Havens, will specifically look at all sides of the interconnected tax loopholes that keep the super rich and powerful in charge. Following the two-day event is a “psycho-geographic” tour of Berlin from artistic research platform RYBN.ORG which will expose the physical hubs through which many these hidden rivers of money pass. Unfortunately, the limited number of tickets has already sold out at the time of press.

Income Inequality, Datasets, and a Documentary

The opening panel on Friday dives into how networks of illicit tax havens are some of the greatest propagators of economic inequality in the world. Panelists Nicholas Shaxson, author of Treasure Islands: Dirty Money, Tax Havens and the Men Who Stole Your Cash, and Maira Martini, senior policy advisor of Transparency International, will connect the dots between shell companies, secrecy, and how, throughout history, these financial mechanisms have been tied tightly to those who hold the reigns of power. The two speakers will draw expert knowledge from their respective roles as a journalist and as a policy advisor.

Nicholas Shaxson has written extensively on how current money markets continuously transfer money away from the marginally poor to the supremely rich. He is referenced heavily in the documentary The Spider’s Web: Britain’s Second Empire where he develops the thesis that British colonialism has not disappeared, it has simply changed into a series of disparate tax havens all over the world.

For her part, Maira Martina will be representing Transparency International, a Swiss coalition looking to combat the types of financial corruption evidenced in documents like the Panama Papers. She has written extensively on Hungary’s “Golden Visa Scheme,” Estonia’s problems with money laundering, and helped to paint a clearer picture for how corruption occurs in the European Union.

Following this discussion is a practical guide for how best to approach massive datasets likes those of the Panama, Bahama, and Paradise Papers. In total, the 25.2 million financial documents were all leaked to the Süddeutsche Zeitung who then passed along the information to the International Consortium of Investigative Journalists (ICIJ). The latter group launched an international investigation which brought into question the financial workings of many governments and leaders. In the first, the sheer quantity of raw information is a gruesome task to prop up a narrative, but the ethics behind such work also demand one’s attention.

To sort between these two forces, Ryan Gallagher, investigative reporter for The Intercept, Friederich Lindenberg, the data team lead at the Organized Crime and Corruption Reporting Project (OCCRP), and Tatiana Bazzichelli, the director of the Disruption Network Lab will hash out the multi-faceted arguments for and against secrecy and transparency.

The closing event will screen Alex Winter’s documentary on the Panama Papers story. It charts the trajectory of the initial data leaks all the way to the grave conclusions for how our society functions. What might seem like simple tax evasion, fraud and cronyism, is actually an extensive mesh of power plays to manipulate world governments for profit.

The largest barrier for journalists and data scientists working to unearth the illicit network of global finance is the opacity of the evidence. Only thanks to generous data leaks were we ever able to begin to understand the extent of the corruption. After that, the greater public still needs talented curators to develop a clear account of what the documentation means. Thus, in an attempt to make real the ocean of numbers, RYBN.ORG will present their work The Great Offshore project. The work looks to decipher the legalese that soothes critics from getting a full grasp of what is actually happening. Reading through formalized agreements, contracts, and press releases rarely offer any real insight into the inner workings of arrangements, illegal or otherwise. Outside of semantics, RYBN.ORG also attempt to show how offshore finance leaves physical marks on the locations that they leverage. 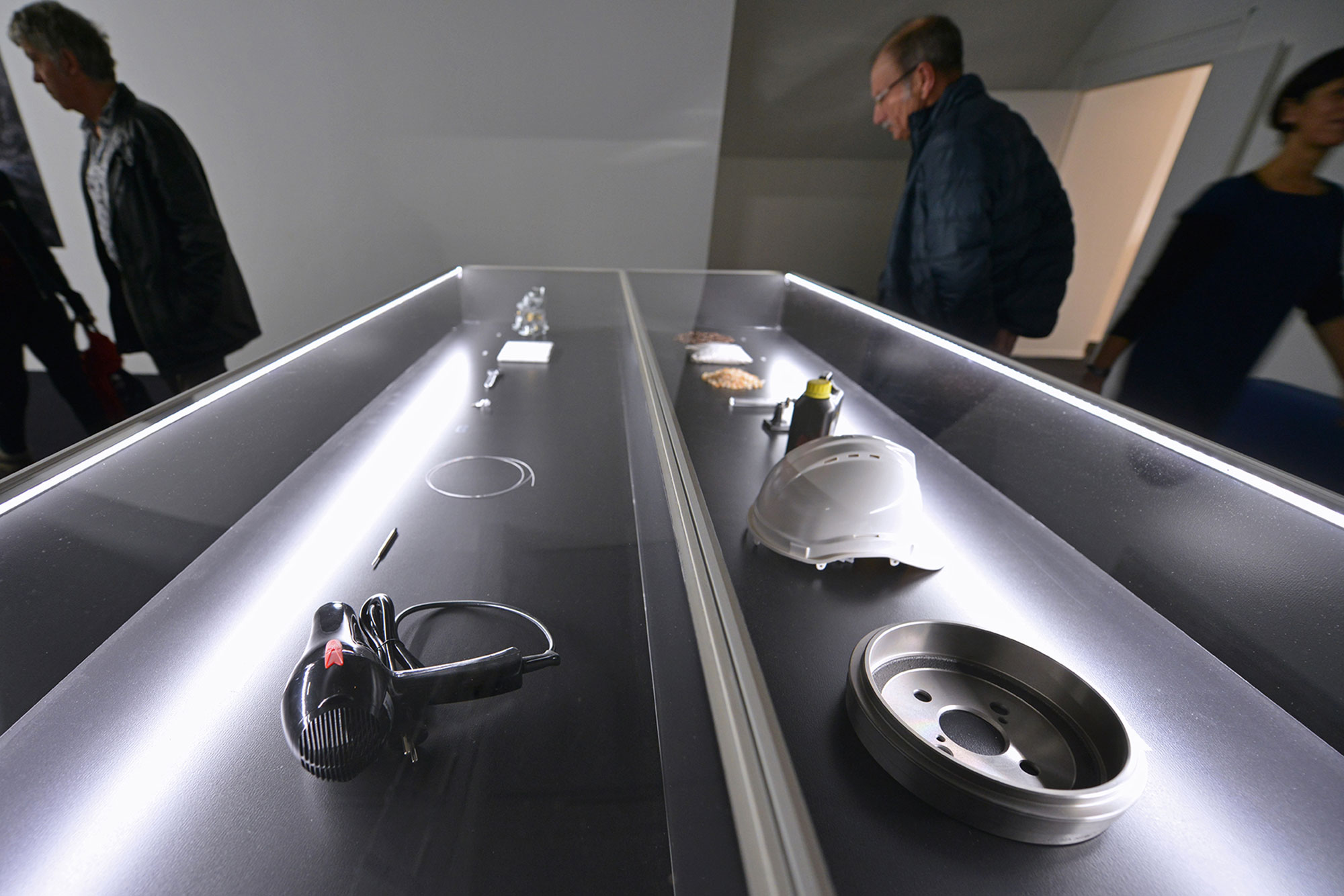 Found objects from The Great Offshore Project’s exhibition at Espace Multimėdia Gantner in 2017.

The Dark Havens keynote shortly after RYBN.ORG takes a closer look at the events leading up to the Panama Papers, how they were handled, and the political blowback of the leak. The anonymous whistleblower ultimately revealed an alternate universe in which the globe’s powerful are able to mitigate laws they term inconvenient. Frederik Obermaier of the Süddeutsche Zeitung will underline the importance of protecting such whistleblowers as well as detail how entire governments like Iran and North Korea were hiding money via the infamous Panama-based law firm Mossack Fonseca. May Heywood, Transparency International’s Global Outreach and Advocacy Coordinator, will moderate the conversation.

One of the tragic features of pursuing such investigations is the real threat of violence. And just as RYBN.ORG exposes the physical aspects of money laundering and financial fraud, many working to expose such networks run the risk of being silenced. In the following panel with Pelin Ünker, a member of ICIJ, Stéphanie Gibaud, the whistleblower behind UBS’ tax evasion practices, Khadija Ismayilova, an investigative journalist from Turkey, the group will touch specifically on the case of Daphne Caruana Galizia. Galizia was responsible for exposing the myriad connections that unveiled the Maltese government’s principal role in a series of global money-laundering operations. As a result, she was assassinated on October 16, 2017. While not nearly as sombre, both Ünker and Gibaud will recount their trials and tribulations when following similar leads in Turkey and France.

The event begins  Friday, April 6, with doors opening at 17H30 and the first talk happening at 18H. The entirety of the event, outside of the tour from RYBN.ORG, will take place at Kunstquartier Bethanien, Mariannenplatz. Two-day tickets are €14 when purchased online and €16 at the door. One day tickets are also available, including the Panama Papers screening, if used on April 5. Although the Workshop with RYBN.ORG is sold out, you can still purchase a waiting list position for €15, of which will be refunded if no openings arise. For more information on the program and where to buy tickets, check out Disruption Lab’s landing page for the event here.